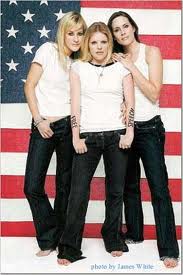 My first reaction to the news was more somber relief than euphoria. It’s been too long and too much has happened. So I was surprised to see the jubilation outside the White House last night and everywhere today. But it pleased me very much. I like spontaneous jubilation, encourage its outbreak, and wish I could have been there to high-five elated strangers.
More thoughts:
• My favorite celeb tweet comes from Natalie Maines of the Dixie Chicks. She wrote she was pleased to see our president announce the news in a dignified blue suit in front of flags rather than in a flight jacket and from the deck of an aircraft carrier. If you haven’t seen the Chicks’ performance documentary “Shut Up and Sing,” you owe it to yourself to do so. It’s a reminder of the blind hatred the far right unleashed on anyone brave enough to speak out against the Iraq War. The Chicks received death threats and basically chucked their career with mainstream country radio. Did they cow before the hostility? No. Instead they raised their middle fingers and in 2006 released a searing song “Not Ready to Make Nice” about the whole ordeal. The Chicks could release a series of Slim Whitman tribute records and I’ll buy everyone of them. In the never-ending arguments ricocheting around the world, you can take Sarah Palin, Glenn Beck, the birthers and all the combined blowhards of Fox News. I’ll take the Dixie Chicks. On every issue.
• I was tickled to see the networks relaunch all those old al-Qaeda training videos that showed would-be holy warriors swinging from hand-over-hand bars like the one down at my kid’s elementary school. If this was intended to menace, it never worked with me. I had a feeling our Navy SEALS weren’t training on monkey bars and playground equipment.
• I’ve found myself becoming more sympathetic toward W. Bush while maintaining my belief he was utter incompetent in way over his head. But my disdain for Donald Rumsfeld remains absolute. His arrogance in the face of his many failures still astounds.

• My favorite post sweeping Facebook shows Obama waving to the crowd saying, “Sorry it took me so long to release my birth certificate. I was too busy killing Osama bin Laden.”
• For purposes of comedic symmetry, I am hoping we’ll learn that bin Laden’s home in Abbottabad is near the town of Costelloabad.
• I was fortunate enough to spend three days doing a bunch of newspaper stories on Navy SEALs back before the first Gulf War. I’ve been lucky my whole life in that I get to spend time around impressive and competent people and around good people who are just a lot of fun. But I’ve never been more impressed by the combination than those exhibited by Navy Seals. Truly, they were the best men I’d ever met.
• For the record, a Navy SEAL is an elite tactical soldier and SEAL stands for their capacity to operate on SEa Air and Land. These SEALs are not to be confused by the cuddly ones insulated by a thick layer of subcutaneous blubber.
• I’ve watched more Fox News today than I have since the 2008 presidential elections. It’s a joy watching their anchors tie themselves in knots trying to ensure all the home team Bush administration gets at least half the credit for the successful kill that eluded them for seven years. You’d think Karl Rove was flying one of the choppers. Once I’m done here, I’m going to scan the channel guide to see if there’s a Contortionist Network nearly half as entertaining.
• My heart kind of catches when I watch the videos of the Philadelphia fans at the Phillies-Mets game when news of bin Laden’s death started to break. I wish I could have been there with them. And, man, I wish I could get Josie out of school and take the whole family up to Shanksville about an hour away. But I wouldn’t want the kids to see me cry and cry I always do whenever I go to Shanksville.
• I don’t think you can underestimate the impact this will have on the 2012 races. I believe it will thin even further the already weak Republican presidential field. That Haley Barbour, an attractive and savvy campaigner dropped out, shows he doesn’t think Obama can be beat. Now, neither do I.
• Just learned bin Laden's full name is Osama bin Muhammed bin Awad bin Laden. Give him four more bins and he could be Dollar General store.
• I wish I could take the week off and just immerse myself in The New York Times and other top media to devour every word of the story. It’s too over-the-top to call this our generation’s V-E Day, but it’s sure something to savor.
• Love the historic coincidence that the day bin Laden was killed was the same day Hitler died and the same day Bush donned the flight jacket and did his “Mission Accomplished” thingie.
• Rock on, America, and God bless the men and women working at home and abroad to defend the greatest nation on earth.
Posted by Chris Rodell at 12:54 PM