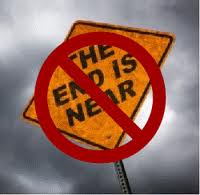 The snarky headlines are already popping up all over creation. My favorite so far: “Apocalypse Not Now!”
I’m not one to so rapidly write off devout people of faith. After all, the Biblical calculations The Reverend Harold Camping relied upon to predict the Rapture never mention leap years.
The other aspect of this that no one seems to have considered is that maybe the Rapture has occurred and there were only like five or six Christians on the planet deemed worthy of saving.
That’s about how many I can name.
I was talking with a Gideon the other day -- and how many people can say that? I’m doing a story about how Gideons have managed to place nearly 2 billion Bibles and New Testaments in so many hotel rooms around the world.
It’s a fascinating movement. I’ve read about and interviewed people who’d entered hotel rooms thinking of suicide and found a Bible they credit with saving their lives.
On the flip side, I also talked to one hotel manager who said she wishes she had a nickel for every time she’s opened a drawer Bible and found a condom stashed inside.
There’s a whole range of stuff going on in our nation’s hotel rooms. Remember to always pack slippers.
I’ve found the Gideons to be sober and serious about their mission and certainly joyful about their impact. They should be proud. I remain disappointed that I didn’t find one Gideon so wildly enthused about Bible distribution that I could declare him or her a Giddy-on.
Maybe that’s a movement ripe for launching.
So I exaggerate when I say there are only five or six Christians worthy of saving.
There are, of course, multitudes that do so much good and I’m proud to have them as friends who, no doubt, pray for my miserable soul.
And I now have a Gideon saying prayers for me, which I find cool.
We concluded a lively interview with me asking all the questions before he turned the tables on me and asked: “Chris, are you a Christian?”
I wonder about myself. If he was a Scientologist or a Hindu and had asked me if I was of either of those faiths, would I have said, “Hell, yes!” just to ensure the story conclusion would be smooth?
I don’t think so.
I guess I’m a Christian who disdains Christians. That’s bad. I really should love my fellow Christians. That tenet is at the heart of my faith.
But I have trouble pulling it off when I see so many Bible-thumping Christians starting wars, hating gays, doubting presidential birth certificates and health care initiatives and pretending God whispers to them things like who He is and isn’t sending to hell.
I see so many Christians saying and doing things that lead me to believe Jesus Christ spends a lot of time in heaven slapping His forehead and lamenting, “Wrong! Wrong! Wrong!”
That might be what He was doing every Camping predicted today the world would end.
A friend of mine said he was disappointed I hadn’t written about Camping and the end of the world. I told him nothing gets past this blog.
I wrote about Camping way back on January 3. It’s about why I was looking forward to the Rapture so it would mean goodbye to aspects of earthly Christianity that have always ticked me off.
But since it looks like we’re all going to still be in this together for a while, here are some suggestions for evangelicals like Camping and his forlorn followers to help us get along until the next Doomsday.
• Let the hair grow. Jesus looked like a hippie, but today’s Christian evangelicals look like they all go to the same barber, the one based in Mayberry on TV Land.
• Stop using the oxymoron Christian rock. It may be Christian, but it ain’t rock. When it comes to rock, my sympathy’s for the Devil.
• Remember, having a great relationship with the Lord doesn’t mean you can treat the rest of us like crap.
• Don’t interrupt a really good football game by taking the time to thank God for opening up a hole on the right side allowing you to score. Instead, thank the right tackle.
• Be consistent: Don’t condemn all the gays then extend divine forgiveness when one of your high-profile believers or political supporters gets caught playing footsie in the mens room at the Minneapolis airport.
• Admit the difference between believing and knowing.
• For heaven’s sake, stop predicting an imminent end to a world many of us enjoy with gusto. If you’re going to Rapture, next time please keep it to yourselves.
And don’t let the Pearly Gates hit you on the ass on the way out.
Posted by Chris Rodell at 8:41 PM