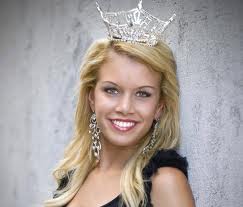 She calls and leaves me sweet messages asking if there’s anything I need. She’s young. She’s beautiful. She’s everything that sends an otherwise happily married father straight off the cliff.
And more.
See, this isn’t Britney from down at the Dilly Dally Deli.
This is Miss America.
And she keeps calling me -- as I’ve aggressively been reminding family, friends and indifferent strangers in the checkout line at the local grocery store.
It all started out as an innocuous little msnbc.com travel story about the annual Duct Tape Festival, June 17-19, in Avon, Ohio.
It was assigned as one of those offbeat Americana pieces.
Silly me, I should have realized something about duct tape could lead to a really sticky situation.
The trouble started when I read that 18-year-old Teresa Scanlan, the youngest Miss America in 90 years, was parade grand marshall.
Okay, I thought. I’ll call her up and get a comment about what it’s like barnstorming the country doing all these oddball festivals, make a few snarky observations and be done by lunch.
That’s why her answer to my first question took my breath away.
“Being parade grand marshall at the Duct Tape Festival is like a dream come true,” she gushed. “I’ve loved duct tape since I was just a girl!”
Was she being sarcastic?
“Absolutely not. Pageant rules stipulate I can only be Miss America for one year, but I’m going to see if they’ll let me be Miss Duct Tape for eternity! It’s the world’s greatest product. There’s nothing it can’t do!”
I was floored. But she was utterly sincere.
She told me how she was fascinated as a girl when she heard about kids using Duck Tape (Duck -- quack, quack -- is the brand) to make crafts and even prom dresses.
It became her obsession.
Home schooled in Gering, Nebraska, her parents finally thrust her into the cruel tumult of public education her junior year.
“I started mingling with public school kids and told them all about how much I loved duck tape,” she says. “They thought I was insane.”
I was surprised by a flash of outrage. How dare they.
She said the product helped her construct something essential that goes unmentioned in all the Duck Tape promotional brochures: It helped her build character.
“It taught me it’s okay to be different. The cool kids were all in sports. But I did what I loved and what I was good at and that gave me the confidence to continue in the performing arts.”
By now I was smitten. I wanted to help her. I wanted to tell people about her. I wanted to shine a light on something so good, so pure.
I wanted to run out and buy a roll of Duck Tape.
When she called and left a routine message about a follow-up question, I dashed straight down to the bar and played it for the boys.
Actually, I played it 12 times, pausing to expound on the parts where Miss America said how good it was to talk to me and to get in touch if there was anything else I needed.
How long, I wondered aloud, can I keep this message before it starts getting creepy?
“You crossed into creepy the second time you hit play on the message button.”
I know, I know. I’m all wrong for her. She’s 18, I’m 48. I already have three beauty queens at home. Worst of all, I just got this really bad hair cut.
For nostalgia’s sake, I went to see the family barber Dad started taking me to when I was 6. I stopped going to him because he always cut my hair like I was still 6.
Happened again yesterday. I’d been cultivating a real shaggy mane. He laughed and said I looked like I’d spent the last 15 years on some island reality show.
When I left I looked like a Fox News anchor.
The look might work for the image consultants who’d advise Miss America on the kind of man with whom she should be seen.
But it won’t work for someone as authentic as Teresa Scanlan, a beauty queen who like so many before her yearns for world peace.
It’s just that she’s unique in believing it can be achieved through a judicious application of duck tape.
She truly believes there’s nothing duck tape can not fix.
Poor kid.
She hasn’t seen my hair cut.
Posted by Chris Rodell at 9:18 AM