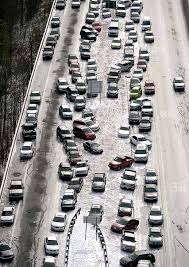 (725 words)
Many of my fellow frost-bitten northerners reacted with gleeful scorn upon reading the headline “South paralyzed by 2 inches of snow.”

They mocked them. Called them sissies. Belittled their soft reaction to a weather condition that’s the meteorological equivalent of YouTube kitten videos.

Not me. Mine is not a spiteful nature.

My thoughts were more historical.

I thought, “Gee, how come it took us four whole years to whip their Rebel butts in the Civil War?” You’d think a people paralyzed by two inches of snow would flee crying from a battlefield if you stood up and yelled, “Boo!”

Many of us have played golf in worse weather.

This is true: one February I golfed on a day so chilly I was actually able to hit a shot off a frozen lake.

The day was cold, but the match was heated. My opponent hit a nice drive straight down the fairway of a dogleg left par 5 with a frozen pond at the bend. I realized I could gain as much as a 50-yard advantage if I skipped my tee shot off the ice.

But I was unable to hit the drive as expertly as I’d hoped and the ball came to rest about 10-yards from shore. This was still fine. The rules of golf say a ball in a water hazard requires a two-stroke penalty.

But the rules say nothing about a ball resting on top of a water hazard. So I took my trusty 5 iron and gingerly ventured out onto the ice.

I gave it a mighty swing and sent the ball sailing toward the hole. I chipped on and made a putt for a spectacular birdie that won the hole.

The match, however, I lost as I limped around the remaining four holes in agony as my soaked pants froze solid.

See, the commotion of my jerky swing caused the thin ice to break and I fell in clear up to my hips.

Still, it makes a great story and the bragging rights only diminish when I tell the whole truth about what really happened, something I’ll never do again.

What most surprises me is how survivors of the Atlanta gridlock seem to elevate their ordeal to historic levels. It’s not like this was the 1847 Donner Party stuck in 30-foot snow drifts in the Sierra Nevadas near Truckee, California. Of the 87 emigrants, only 48 survived with many of them resorting to eating the flesh of their fallen comrades.

One commuter, Jessica Troy, said it took her 16 hours to drive 12 miles. “We literally would go 5 feet and sit for two hours. It was dire.”

Why any able-bodies commuter would endure that with so many big city amenities nearby is mystifying. She must really like listening to the radio.

Here’s what I’d have done had I been there:

For starters, I’d have taken a good long nap. I never have enough nap time and 16 hours in a vehicle without the kids would be heavenly.

Then I’d put the car in gear and move 5 feet.

If my laptop was charged, I’d have probably started blogging about the traffic.  I’m sure I’d try and keep the tone playful and light. It’s just a little weather so there’s no point being bitchy.

Then I’d put the car back in gear and move 5 feet.

I’d get out and introduce myself to my traffic neighbors. I’d see if they were doing okay and ask if there was anything I could do for them. See, I’d want to be making friends in case we were, like the Donners, stuck there for another six weeks and someone started to get hungry for some man meat.

Then I’d put the car in gear and move 5 feet.

I’m sure at some point, I’d probably get bored and hungry and decide it was time hoof it to the nearest McDonald’s and grab a bite to eat.

If there was a hotel nearby, I’d snag a room and settle in to watch The History Channel. I think we gain perspective when we examine the hardships of those who’ve struggled before us.

In praise of, yikes, winter?
Posted by Chris Rodell at 2:08 PM