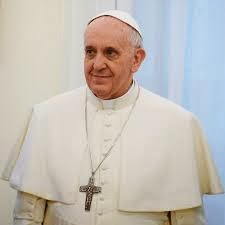 We’re so conditioned to surly behavior when we see someone doing anything good we confuse it with magnificence.

Have we ever seen a holy person so take the world by storm? I mean besides guys like Jesus, Muhammad and Buddha, men who went viral centuries before Facebook making their enduring accomplishments all the more remarkable.

Pope Francis is asking us to help poor people and be kind to one another. He’s preaching we need to treat people the same regardless of how they look or who they love. He’s saying God wants us to prosper, but not at the expense of less fortunates.

Pope? If he starts reminding me to eat all my vegetables the guy could be my Mom.

And that’s not a slam. We need more of all that. And, yes, my Mom would have made a dandy Pope if she hadn’t been born with that redundant X chromosome.

It’s just that most of what he says and does shouldn’t be such an inspiring revelation; it should be part of the job description. And I’m not talking about the job of being pope.

I’m talking about being human.

He goes out at night and helps the homeless people. Isn’t that something we should all do once in a while?

He takes public transportation and eschews a fancy palace to live in a more humble guesthouse. Do you feel yourself being crushed by an ambition for more than you need?

It’s like the Vatican picked a pope and we wound up getting Fred Rogers.

He’s shaken up the whole world and he’s only been pope since March. It’s very exciting, not to mention historic.

Who knows what we can expect from him in the next year? The next five? The next 10?

The millions who come to cheer him have led many to dub him the first rock star pope.

So I hope you’ll forgive this purely secular diversion, but it would be cool if Pope Francis started acting like a real rock star. I mean THE rock star.

I mention this now because today would have been Presley’s 79th birthday.

Pope Francis says we should be more kind to the poor.

Elvis thought it was cool to give them Cadillacs. It was like he binged on it.

Some of the stories are suspect. Like the one where an elderly black cleaning lady was making her daily walk to work when she saw his stretch limo parked along a sidewalk with all the doors open. She peeked her head inside and gushed amazement. Elvis said, “Order her one just like this.”

Others are not. The Rock ‘n’ Roll Hall of Fame in Cleveland has a great Elvis display that notes on July 27, 1975, at Schilling Motors in Memphis, Presley purchased 13 Cadillacs for various favorites and one total stranger named Menni Person, who just happened to be window shopping when Presley arrived. When she complimented his car, Elvis said, “Well, you can’t have that one, but I’ll buy you one. Pick one.”

The iHeartElvis.net site lists 200 times when Elvis bought cars as gifts. And, of course, he did so much more. If someone admired his ring, he’d pull it off and give it to them. His philanthropy is legendary.

He died at 42. Such a pity. Think of the fun we’d have all had if he’d have cleaned up and lived another 40 years.

And I’m loving Pope Francis even though I’ve yet  hear him belt out a papal version of “Love Me Tender.”

So how about today on EP’s birthday, we all just try and be a little more kind to one another. Who knows? It might score you a free Caddie. Or maybe a spot in heaven.

And if you can’t be like the King, try and be a little bit more like the pope.

Amazingly, we live in a time when that goal’s well within everyone’s humble reach.

Arnold & Elvis: Cool things raining down on me

The papal butler did it
Posted by Chris Rodell at 2:21 PM