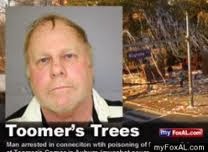 Much of sporting-obsessed America will be tuning in to the BSC National Championship Game tonight. They’ll be watching for reasons ranging from partisan pride to base wagering that the Florida State Seminoles will beat the Auburn Tigers or vice versa.

None of that interests me in the least.

I care only about how the final score affects just one man.

He’s maybe the most hate-filled man on the planet.

And that’s no exaggeration. There are probably veteran al Qaeda militants who could play Dr. Phil to Updyke by counseling him maybe he ought to consider whether it’s time to simmer down.

Guaranteed, down is not the direction Updyke, 64, will ever simmer. A retired Texas state policeman, he seems like a man who lives at a full boil.

I’m fascinated by any extreme human emotion, none more so than pure hatred.

It’s something that’s beyond your control. You feel the need to pet it. You think about it all the time even when it’s making a real mess.

I’ll leave it to you to decide whether I’m referring to the puppy or the erection.

But, ah, love, our sweetest emotion. Who among us has not at one time or another made a fool of ourselves over affections we’re too embarrassed to admit?

Certainly, we’re all capable of hatred, but it’s not something in which sane folks ever revel. No one in their right mind celebrates hatred.

Well, no one but your typical sports-obsessed fan.

Yes, Updyke’s a fan of the Alabama Crimson Tide, heirloom home of fabled Coach Bear Bryant, and perennially among the best teams from the best conference in college sports, the fearsome SEC. Experts speculate the Crimson Tide could beat many professional football teams.

And because they are so good, they are widely reviled by resentful fans of lesser teams.

So who does Alabama hate?

That would be tonight’s BSC Championship participant Auburn Tigers, right now the No. 2 ranked team in America.

Even those of you who are unfamiliar with college football rivalries will sense the merging of combustible elements. And it’s all taking place between two schools just 2 hours and 34 minutes apart within the borders of a state that excels in hating like no other.

That Harvey Updyke’s name will forever stand out in the state’s annals of hate is even more remarkable in that his victims weren’t people.

He killed the stately 130-year-old oaks at Toomer’s Corner, the spiritual center of Auburn’s magnificent campus. If you’re not familiar with it, it’s the kind of place where delirious fans go to celebrate important team victories. Generations of Auburn students have gone there to propose marriage to their sweethearts and have then rejoiced when the offspring of those marriages did the same with other Auburn sweethearts.

And after Alabama lost to Auburn in 2010 as the hated rivals were on their way to a national championship, Updyke drove to Toomer’s Corner and poisoned these magnificent and historic trees with a commercial herbicide so potent authorities were unsure if the groundwater would ever be safe again.

What did he do then?

He called a sports talk show, never a forum for clear thinking, and bragged about the deed. Calling himself, “Al from Dadeville,” he described his crime with telltale clarity that would be his undoing and then signed off with “Roll Damn Tide.”

I know many rational people who thought his crime was so vile, so hate-filled, he should have been given the death penalty.

And I know that there are places in Alabama where he is considered a folk hero who’ll never have to pay for another drink as long as he lives.

He spent six months in jail and was ordered to pay $800,000 in restitution, a sum that’ll ensure he’ll never earn another dime without having to think about the hated Auburn Tigers.

He was freed from jail June 10 to what I thought would be quiet anonymity.

His probation includes many sensible restrictions, but watching Alabama football isn’t  one of them.

So, certainly, Updyke was watching November 30 when Auburn shocked Alabama with a last-second comeback win that was probably greatest football game I’ve ever seen in my life.

As euphoric Auburn fans poured onto the field to celebrate, I thought about Updyke and wondered how a soul as tormented as his would react. Had incarceration simmered him down?

This anti-social misanthrope took to social media to post what at first sounds like remorse: “I wish now that I had not killed those trees . . .”

So, of course, tonight I’ll be cheering for Auburn.