On HBO's "Girls" being naked vs. being nekkid 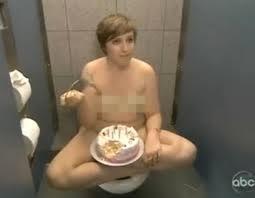 (741 words)
I was immediately drawn to a story about excessive and gratuitous nudity on the HBO show “Girls” because I enjoy controversy and because I invariably read any story that includes the words “Girls” and “nudity” in the headline.

“I don’t get the purpose of all of the nudity on the show, by you particularly, and I feel like I’m walking into a trap where you go, ‘Nobody complains about the nudity on ‘Game of Thrones,’ but I get why they are doing it… They are doing it to be salacious and, you know, titillate people. And your character is often naked just at random times for no reason.”
I must begin by confessing I’m the kind of guy who still reflexively snickers when he sees the word “titillate.” And I don’t watch “Girls” and sense no overwhelming cultural pressure to do so. But from what I know about the show, it sounded like a fair question: if the nudity doesn’t either advance the plot or figure in romantic situations, what’s the point?
Well, Dunham took the question as an unkind shot at her appearance and said if Molloy “wasn’t into her” then that was his problem and he should see a psychiatrist.
Producer Judd Apatow seethed that Molloy’s question meant he is a sexist misogynist, a career-killer label in PC Hollywood that’s only slightly worse than acknowledging aloud Adam Sandler movies suck.
Best of all was fellow producer Jenni Konner who said the question caused her to fly into what she said was a “rage spiral.” I’m not sure what that is, but it sounds like it’d be more fun to watch than anything she’s produced for “Girls.”
Dunham also said her nudity was a “realistic expression of what it’s like to be alive.”
True, but so are things like snoring and runny noses, but that doesn’t mean they make for compelling television.
But what about non-sexual nudity, nudity just for the sake of being naked?
The question reminds me of the late Lewis Grizzard, the wonderful Southern humorist, who made a distinction between being naked and being what he described as nekkid.
“Naked,” he wrote, “is when you’re not wearing any clothes. Nekkid is when you’re not wearing any clothes and you’re up to something.”
I’d watch Lena Dunham if she was nekkid, but have no real interest in seeing her naked and, say, fixing a clogged sink.
Maybe it’s a guy thing, but I just don’t feel the need to be naked in my house the way “Girls” stars apparently do. Females, of course, don’t need to fear risking getting dangly parts of themselves slammed in kitchen cupboards or snagged in an inconveniently placed fan that’s set to oscillate.
Yes, nudity is a “realistic expression of what it’s like to be alive,” but I find clothes offer practical utility when hot bacon grease starts to spatter.
This doesn’t make me a prude.
In fact, it makes me a nudist.
During the summer of 2011, I was for about three weeks the nation’s foremost reporter of recreational nudism. I was doing offbeat travel features for msnbc.com and learned that National Nude Recreation Week is -- mark your calendars! -- the second week in July.
The experience taught me a lot about nudity. I learned there are nude-only cruise ships. I learned nude recreation is gaining in popularity. I learned a game of 8 ball played by two naked men is still called 8 ball.
And I learned nudists make sensible distinctions about when it’s prudent to be nude.
I learned this because I began every interview with more than two dozen nudists with whom I talked with the same question: “Are you wearing any clothes right now?”
Invariably, they were. It turns out most nudists -- even those toiling in nudist professions -- wear clothes when they’re not at nudist resorts.
Or as one woman told me: “Nudists may enjoy being naked at the beach or by a pool, but that doesn’t mean we don’t like having someplace handy to put the car keys.”
Well, someplace comfortable.

So let’s not get all pretentiously artistic about being nude on TV.

And that’s not from some TV critic.

That’s from some nudists.

Naked advice on marital discord
Posted by Chris Rodell at 11:32 AM

OMG eating in the bathroom is weirder than the being naked and eating. Put toilet, eating and naked together and it's a pretty unappetizing thing too watch.

I've had some bad seats in restaurants, but that's ridiculous. Thanks for taking the time to read and comment!