Killing them softly: Executions in America 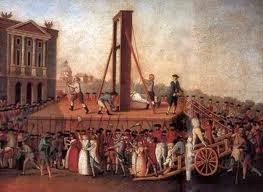 (714 words)
Our national squeamishness over the death penalty was on full display last week in Columbus, Ohio, where it took prison officials 26 minutes to execute convicted killer Dennis McGuire.

It’s incredibly ironic. Innocents by the hundreds are dying every day in America from recreational drug overdoses and sober Ohio prison officials can’t find the right combination of drugs to swiftly kill one guy when they’ve really trying.

Maybe the esteemed panel of medical ethicists who oversee the executions should consult a street junkie.

But of this I’m certain: today’s blog would be entirely different had anyone thought to split McGuire right down the middle, as efficient an execution method as any ever conceived.

He in 1989 raped and slashed the throat of pregnant 22-year-old newlywed Joy Stewart. It’s hard to contend his crime didn’t warrant painful retribution.

We can disagree about being for or against the death penalty, but why are those who so favor it, in this case Ohio’s elected officials, so dainty about its implementation?

I’d be for the death penalty if it was ever proved to deter even one crime, if it and its decades-long appeal process weren’t so prohibitively expensive and if it could be proven we weren’t -- oops -- mistakenly killing innocent men.

The oops factor is most appalling. I invite you to read the “John Grisham” link below. It shares how our nation’s Innocence Institutes are using DNA technology to free scores of wrongly imprisoned men and women who have languished for decades on Death Row.

But let’s for the sake of argument say the death penalty is fair and just. How should the penalty be carried out?

Lethal injection is more expensive and less trustworthy than firing squad, hanging or submitting to the snappiest and most efficient killer of all-time, that being Joseph-Ignace Guillotine’s namesake gift to humanity.

Yes, we’re talking about what the French called “The National Razor.”

Seven pounds of foundry-sharpened steel suspended from a 12-foot tower. The rope is released, gravity is obeyed and the deed is done. No pulse-checking doctor necessary. All one need do is peek into the little wicker basket at the end of the cushioned stretcher.

It’s so simple yet elegant it’s almost like Martha Stewart had a hand in its design.

In fact, the guillotine’s origins are wholly altruistic. The French believed previous methods of capital punishment were cruel and inhumane. The guillotine was considered swift and just. Viva la France!

But was it? Doctors have reported chopped heads will for 15 minutes respond to visual and sonic stimuli with blinks and silently moving lips.

I wish I had the time to learn more about the phenomenon, like what researchers said to the severed heads. Maybe, “Blink twice if that really, really hurts.”

It was last used in France in 1977 -- and that doesn’t seem all that long ago --  shortly before the French outlawed the death penalty for many of the same sissy reasons I cite above for myself.

I don’t believe there’s any place in a civilized society for capital punishment, so having one in America today makes perfect sense.

It’s only human nature for us to want a killer like McGuire to suffer. But there’s got to be better ways to do it than ending his miserable life.

They’ll either over time learn essential people skills and adjust or go crazy having to deal with their odd couple adversaries.

In today’s unjust and arbitrary capital punishment system, it would be more preferable for convicts to lose their minds rather than lose their heads.

The Suicide Pill
Posted by Chris Rodell at 2:35 PM