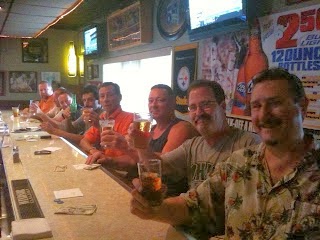 The Centers for Disease Control says at least 38 million Americans are binge drinkers.

I read that and was surprised my blog readership is so minuscule.

See, I consider myself “The Oracle of the Overserved.” My blog frequently celebrates giddy binge drinking while warts ‘n’ all chronicling the pitfalls, hangovers, dashed ambitions of a life spent soused. In short . . .

I guess that means I’ve been binge drinking so long I’m going to need to come up with a new definition for binge drinking. And I have.

Regular readers know my office desk chair is precisely 33 steps out the hall and down the steps from my favorite bar stool. It’d only be seven if Dave ever lets me drill a big hole in the floor. All my friends are always in there and we’re always having all our convivial fun.

The nearest I can explain the bar atmosphere is it’s like it was in seventh grade when you walked into fifth period algebra expecting a test and instead saw a substitute teacher sitting where crabby old Mrs. White usually sits.

The feeling is euphoric. The pressure lifts. You can goof off. No one’s going to make you do any algebra.

The sub, in this case either owner Dave or bartenders Keith or Bill, couldn’t care less what you do as long as you don’t make a mess or start a spit ball battle that leaves them caught in the crossfire.

And that’s not a contrived example. It doesn’t happen often, but it’s not uncommon for me and the mostly middle-aged professional men, white collar and blue, to start shooting spit balls at one another. It’s very childish and I whole-heartedly recommend you start one right now if the office sourpusses are getting too stuffy.

It’s just so much lively fun.

I don’t drink nearly as much as I used to, but it’s still one hell of a lot. I probably go to the bar two or three nights a week from about 5 to 6:30 and leave in time to make it home for dinner.

Friday’s another matter. That’s the night the girls like to stay in and watch anti-Dad movies so that’s my Mardi Gras with bar dinner and the kind of binge that would have the CDC calling for emergency quarantines.

It’s not so much that I really like to drink. I don’t. Drinking can leave you feeling fuzzy headed, bloated and in a diminished cerebral capacity that leads to repeating the same stupid jokes over and over and over.

But I do like the people who like to drink. They’re philosophical, cheerful, opinionated and usually in a state of diminished cerebral capacity that means they’ll laugh at the same stupid jokes over and over and over.

I say it’s because I work all by myself and thirst more for chummy camaraderie than I do alcoholic spirits.

This puts in me in league with a friend whose wife once wondered aloud whether he had a drinking problem.

“I don’t have a drinking problem,” he said. “I have a talking problem.”

I guess I could get that without drinking, but sitting in a bar for five or six hours on a Friday night without buying drinks would, in fact, be criminal. There’s laws against that sort of behavior.

It’s called loitering and I wouldn’t want my friends, especially Dave, to think I’m that kind of derelict.

So I do my duty and guzzle beers while trying in vain to think of something to say that no one’s already heard me say dozens of times before.

And let’s not even get into the difficulties of trying to talk to a drunk while sober. They slur their words, repeat themselves and sometimes nod right off, forehead on the bar, before they get to the cliffhanger punchline.

I think what the study misses -- and I’m assuming it was conducted by teetotalers in white smocks -- is that life’s really, really, hard.

There’s occupational pressures, family obligations, fears of the future, regrets of the past and now the NFL playoffs are on and the Steelers aren’t in it.

So let’s all agree that some of us are going to be prone to a wee bit of binge drinking no matter what the Centers for Disease Control says that might be.

There are way worse diseases than ones that celebrate our common humanity and the need to at least every once in a while get out and enjoy a really good, long giggle.

Heck, catch me with enough time to spare and I’ll drink to anything.

Thirsting for bar conversation
Posted by Chris Rodell at 10:48 AM

Email ThisBlogThis!Share to TwitterShare to FacebookShare to Pinterest
Labels: benefits of drinking, CDC binge drinking reports, definition of a drinking problem, drinking blog, great bars, The Pond in Latrobe, what is binge drinking