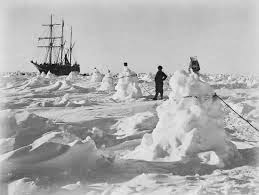 Because I’m philosophically opposed to rescuing anyone in the middle of a really great time, I’m dismayed by the media-manufactured drama coming out of Antarctica.

Yet that’s the situation aboard the Akademik Shokalski, a Russian research vessel apparently owned my someone who learned to spell watching old “Mission: Impossible” reruns.

Teams of helicopter rescuers are racing hundreds of miles through some of the planet’s most treacherous conditions to save 96 souls whose biggest concern seems they’re about to run out of finger sandwiches.

And by “finger sandwiches,” I’m not inferring they’ve made a fatal turn to cannibalism, which would, indeed, be newsworthy. In fact, if I were a network assignment editor a cannibalistic diet would be on the top of the checklist of every rescue effort deserving coverage.

Have you ever seen anyone having more fun in the midst of international rescue efforts? They’re Skyping skits, enjoying New Year’s toasts and practically auditioning to see who’ll get to meet Matt Lauer.

Understand, these aren’t the Chilean miners from three years ago where 33 men were at risk of being entombed alive hundreds of feet below ground.

These folks have satellite communications, DVDs, booze and for those feeling frisky, members of the opposite sex to keep them from becoming situational homosexuals, something common to seagoing men throughout history.

Sure, they are marooned in one of the most inhospitable places on the planet, but I’m starting to expect Papa John’s to earn some free publicity by delivering 20 large pepperoni pizzas.

Heck, the passengers and crew of the S.S. Minnow were in more jeopardy.

(Irresistible Trivial Aside: The only continent on Earth climatically incapable of  supporting the world’s most prolific species -- the ant -- is the one that begins with the letters A-N-T.)

How dangerous can it be if people all over the world are bumming that they can’t be on board? I’d love to be there. I’d blog, tell entertaining stories and start getting good and drunk around 4 p.m.

So it’d be just like being here in Latrobe except my outdoor urinations would give me a sporting chance to pee on a penguin.

Maybe I’m jaundiced because I recently saw a Smithsonian Network documentary about the historic travails of British explorer Ernest Shackleton and the 56-man crew of the Endurance during an South Pole exploration from 1914-1917.

Talk about those in need of a timely rescue.

Like the Russian vessel, the Endurance became entrapped in the ice and nearly 99 years ago on January 15 it budged no more.

Shackleton believed the ices would eventually shift and liberate the ship. He was half right.

The ices did, indeed, shift but instead of freeing The Endurance, they crushed it. It sank beneath the surface on November 21.

In all the crew of Endurance would spend 497 consecutive days either on water or ice. What preserved the sanity of the men during these unimaginable hardships?

As soon as I heard the narrator mention dogs, my imagination filled with dread. Students of distant exploration will instinctively know where my thoughts led.

It turns out my dark thoughts were misplaced.

The men didn’t eat the dogs until near the end when their own rations were down to a mere pound a day.

But prior to that Shackleton’s dogs are a story of great joy with many men saying their companionship were lifesavers. The dogs were playmates, mascots and loving buddies.

Right up until the dogs became dinner.

I’d encourage you to learn more about Shackleton and Endurance. It’s incredible.

Familiarity with the story is causing me to reconsider my peevishness with my own  little yip dog, Snickers (and I wish our daughters had named him Peeve so I could in all honesty say, “And this dog is my pet Peeve”).

Who knows? Maybe one day he’ll sustain me if the furnace ever goes out.

These days, that’s the kind of inconvenience that qualifies as news.

On the hottest day of the year, a toast to ice!

Give me a break? Still not my turn
Posted by Chris Rodell at 4:52 PM