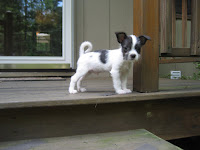 I guess I owe Rick Santorum an apology. I was among those who ridiculed him in 2003 for saying gay marriage would lead to man-on-dog sex and other bestial recreations.

The outraged gay community responded with a subversive lexicological campaign so vicious I dare not repeat it here (just google “santorum.")

But lo and behold, it is in fact happening.

Man is marrying dogs in Wisconsin!

And not just any man.

Let me clear that up. Dogs are marrying other dogs and an Elvis impersonator is presiding over the puppy nuptials.

It’s all part of the silliness at the Wisconsin State Fair, a veritable corny-copia of wacky events, competitions and homespun entertainment sure to appeal to anyone that’s ever dreamed of trying their luck at some cow plop bingo.

“It’s going to be a lot of fun,” says state fair spokeswoman Kristen Chuckel. “It’s pure Vegas. Elvis will marry the couple and sing to them. There will be champagne bowls, formal attire, doggie-maids and doggie-men. There will be special dog tags and the pups will get doggie bone bouquets.”

I found out about it as I was researching a story about oddball state fair stunts and competitions -- outhouse racing, butter Space Shuttles, cricket spittin’ contests, etc.

But I was curious from a personal standpoint.

I have a dog I’d like to marry off.

But I suspect he’s gay. And I’ve been reluctant to broach the subject with the cheerful spokesperson out of fear she might laugh at me.

And who wants to be laughed at by a woman named Chuckel?

Being the parent of a dog I suspect is gay is a challenge for any traditional parent.

I had one other dog that -- and I know this is politically incorrect to say -- was perfectly “normal.”

Yep, Casey liked the bitches, and please don’t let that urban-sounding phrasing confuse you into thinking Casey was a rapper.

He was a sweet and beautiful Golden Retriever with zero street cred.

But he was all boy. He loved to screw and did so with gusto, neighborhood dogs and their owners’ legs right up until outpatient surgery rendered it a physical impossibility.

Snickers isn’t like that at all. He’s part pug, part chihuahua, a parental pairing that sounds like the screwball premise for some canine rom-com.

He’s a purse puppie, the kind Paris Hilton uses as a fashion accessory.

He’s 1 year old and I still mistakenly refer to him with female pronouns. I can’t believe we’re the same gender.

That I suspect he’s gay couldn’t possibly change my feelings for him. I’m sure I’d still despise him if he were as mucho as the Old Spice dude.

And he’s high-strung and yippy. He’s entered an infuriating shoe-chewing phase, ruining one of my church loafers after he pried open to door to the closet.

Casey was the kind of dog you’d enjoy lounging in front of warm fires.

Snickers doesn’t lounge in front of warm fires. He starts them.

So I want him out of the house.

But has the Wisconsin legislature approved gay canine weddings?

Should gay dogs in Wisconsin be afforded the same rights as gay humans in New York and other states?

Of course, the point is moot until Snickers can come to grips with his own sexual orientation. He needs to take a good long look at himself in the mirror, the one on back of the bedroom door that goes clear down to the floor.

He won’t be the first being to come out of the closet.

He’ll just be the first to do so with one of my loafers in his mouth.