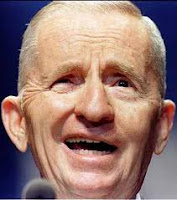 It pains the academic in me to realize the best way to educate a forgetful America on the folly of the Tea Party simpletons is to urge them to seek a classic 1992 clip from Saturday Night Live.

It may have been the most uproarious skit the show’s ever done. It features the late Phil Hartman (oh, how I miss him!) and Dana Carvey.

But Carvey had double duty. Through split-screen chicanery, he also played a man who at the time surpassed even the current Tea Party in political impact and sound-bite stupidity.

That would be H. Ross Perot.

If you’ve become fired with political passions in just the past two years it probably means two things: One, you’re a Tea Party Patriot convinced you have all the answers; and, two, you’ve likely never heard of Perot.

And that’s a pity.

Just five months prior to the ’92 presidential election, he was leading in the polls over both Bush and Clinton.

The Texan became a self-made billionaire through founding Electronic Data Systems. And he oversaw a daring a rescue mission of two hostage employees from Iran in 1979, an operation that became the basis for Ken Follett’s “On Wings of Eagles,” a best-seller and eventual miniseries.

He was one of the most admired men in America.

Then he made a crucial tactical error.

He opened his mouth. And America learned the only thing more entertaining than hearing Carvey lampoon him was hearing Perot speak for himself.

He was folksy. He got $5 haircuts. He talked about going to Washington to clean out the barn and giant sucking sound we’d hear if we elected anyone but him.

He just made it all sound so simple.

And he wasn’t interested in compromise and would mercilessly ridiculed as elitist anyone who disagreed with him. He made his operatives sign loyalty oaths.

Any of this starting to sound familiar?

I remember one presidential debate in which Perot -- I swear to God -- held up a poster of an outline of Arkansas with the silhouette of a chicken dominating the entire state.

He was saying if we elected Arkansas Governor Bill Clinton president we’d all wind up plucking chickens.

To quote Secret Agent Maxwell Smart, “Missed it by that much!”

Clinton took over a sluggish economy, raised taxes on the rich (Perot, to his credit, was perfectly okay with this), and launched one of the greatest job-creating economies the world has ever seen. It was eight years of peace, prosperity and all that other stuff.

He left office in 2000 with a balanced budget augmented by a $230 billion surplus. Economically, his presidency was such a success it’s surprising the Republicans haven’t tried claim him as one of their own.

But what happened to Perot?

It’s like he rode that giant chicken into the sunset never to be heard from again.

His near complete disappearance from public life is incredible.

Yet the man who once had all the answers today refuses to address any of the questions.

John McCain, who as much as any man alive helped conceive the Tea Party, yesterday on the floor of the U.S. Senate denounced them as “hobbits” inhabiting a “bizarro” world where they are “deceiving” their constituents.

The few grownups that remain in the Republican Party look feckless and scared in the face of the Frankenstein monster they raised up on birther hysteria, anti-tax mania and the demonization of the government they view the way the rest of us view the Taliban.

Yes, America, just as that Moses of the Tea Party warned, there is indeed a giant sucking sound.

And it’s becoming increasingly clear as to the identity of the ones who suck the most.