Am I ready for some football? Nope 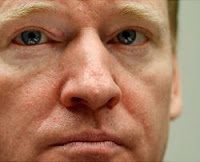 Our great national nightmare appears to be over and a downtrodden constituency will again receive just compensation.

That was Roger Goodell’s grand gesture when he and the NFL owners locked out the players 4 1/2 months ago.

It was one of the oddest PR moves in labor history. He said he’d stop taking his $10 million salary and instead take just a buck.

My first thought was, “Gadzooks, he’ll have to work eight years before he can hope to afford a warm domestic beer at an NFL stadium.”

In a league that couldn’t figure out how to divvy up $9 billion in revenues, he was trying to show solidarity with, well, who?

Those were the two parties who declared the negotiations resulted in a win-win.

From Sports Illustrated’s Peter King: “No one in the NFL will be eating on the cheap now, especially with the players getting a hefty 55 percent of all network TV money -- which could reach $8 billion in 2014. Imagine that: The players’ share of the TV revenue that year will likely be more than the total league revenue of $5 billion 15 years earlier. The nation is recovering from the worst recession since the Great Depression. This new deal proves the NFL is immune to it.”

It’s not with me, and I assume it won’t be with fellow rationals.

I’ve had it. For the first time in almost 30 years, I won’t be attending any games this year and I intend to wean myself off my Sunday fix.

When owners and players say the agreement means both won, it can only mean one thing:

It’s gone unmentioned in nearly all the news reports, but one of the major issues instigating the owner lockout was the NFL desire to extend the regular season from 16 to 18 games.

The reason according to Goodell? It’s what the fans want.

He said fans like me, a second generation Pittsburgh Steeler season ticket holder, were tired of paying $85 per seat for two meaningless pre-season games.

I made the local news in 2009 when I was arrested for trying to “scalp” $300 worth of Steeler pre-season tickets to an undercover cop for $200. The actual “crime” was selling tickets without a $300 vendor’s license.

It was a situation that would have had even an absurdist like Kafka slapping his head in disbelief.

But that sensible solution would have sliced into greedy owner profits.

So one of the alleged main reasons for starting the lockout -- fans upset over paying for tickets no one wants -- has gone unaddressed. Guaranteed, in five years the tickets for those meaningless games will be $100 each.

Heinz Field in Pittsburgh, a taxpayer financed stadium, opened in 2001. My ticket for the inaugural game was $46. Those tickets have in 10 years nearly doubled in price.

Attendance at regular season games will continue to erode as fans choose to stay home and watch infuriatingly officiated games on HD. TV black-outs will rise along with pay-per-view football via NFL Network.

Illicit off-field behavior by renegade players will likely only worsen with added income.

The new labor deal runs through 2021.

Where do you think that’s going to come from?

But this much I know: if it’s ever going to come from regular guys like me, we won’t have enough left over to pay Roger Goodell’s saintly salary from the past four months.

This needless lockout didn’t cook the goose that lays the NFL’s golden eggs.

But by doing nothing to address growing fan disgruntlement, it puts it in the pot.