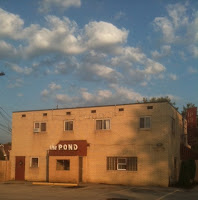 My first impression was we were three besieged men in a lifeboat adrift amidst a sea swollen with undesirables trying to claw their way to safety.

We were using our oars to beat them back to their doom.

Then I realized my analogy was all wrong.

We were Shaun, Ed and Liz in the Winchester Pub fighting for our lives against the hungry zombie horde.

We were a real-life depiction of the 2004 zom rom com (zombie romantic comedy) “Shaun of the Dead.”

The Pond had been closed for the entire week while Dave and staff took their summer vacation.

The social vacancy turns many of Latrobe’s most devoted inebriates into zombies.

People know the bar’s closed, but they still walk up to the doors and press their beaks against the glass. They tug at the door handles.

They call me at my office above the bar and ask if he’s open.

“I swear I saw someone moving around in there. You sure he’s closed?”

Of course, if he opened on the sly I wouldn’t tell a soul.

I’m too sentimental about the opportunity to have a closed bar open only to me.

Being welcomed to imbibe in a locked bar is the drinker’s equivalent of joining baseball’s 3,000 hit club.

It’s just you, the owner and several soothing walls of free hootch. It’s something only elite bar patrons ever get to experience.

I’ve lost count the number of times it’s happened to me. I guess that makes me the Pete Rose of drinkers.

That’s why I started to tingle when Dave said, pssst, stop in if you see my car out front.

It happened on Friday afternoon.

He unlocked the door and waved me in. I imagine I felt like Charlie did when Willy Wonka welcomed him into the chocolate factory.

He locked the door behind me.

The front door commotion drew the first zombies. They’d seen me enter and thought their Friday Happy Hour was back on.

But Dave just shook his head and mouthed, “W-E’-R-E C-L-O-S-E-D.” The two looked confused and staggered away.

Next at the door came Chuck. He’d texted me earlier that Dave’s car was out front (my office faces the back).

I told him I’d text him the instant I knew if Dave was letting a privileged few in. He must not have trusted me because he showed up without waiting to hear back.

Truly, I was about to text him. He’s an enthusiastic reader of my blog and I reserve all my best favors for those of that designation.

It’s something you might want to keep in mind if a zombie outbreak ever occurs.

They were coming now about one every five minutes. Dave was steadfast in his refusals.

We speculated about who we’d let in. It was a short list.

Cheap tippers were ruled out, as were people who like to argue about politics. We split up some families because we liked the husband, but not the wife and in some instances the reverse.

Regulars include about five regular Joes who are all helpfully named Joe. The Joes would each get a pass.

We agreed it would be wise to let Bill the bartender in. Zombie or not, he terrifies us too much to risk his wrath.

By 5 p.m. zombies were filling the parking lot. Chuck, not wanting to overstay his welcome, made a break for it. He hasn’t been heard from since.

His bravery, not to mention his manners, exceed my own. Plus, there was still plenty of booze.

I wasn’t about to budge.

It’s a true pleasure to spend alone buddy time with Dave. He’s usually busy treating every other customer like they mean the world to him.

Some people go through their entire lives never knowing how much they mean to the people in their little orbits.

Dave is beloved enough he could be mayor or even Santa Claus.

Instead he chooses to run a little family bar where maybe 100 or so otherwise strangers feel welcome to visit and share a little bit of their lives.

It’s one of those rare kinds of thinking man’s taverns where one of Dave’s signature jokes involves Mahatma Gandhi and a squeaky clean punchline that concludes: “He’s a super calloused, fragile mystic who’s hexed by halitosis.”

The telling of it is its own sort of field sobriety test.

Of course, it had to end and that was too bad.

I could have spent the night with him as we roared clear through to that stage of drunkenness where two guys get to weeping about their daddies.

The zombies looking in and seeing us with our arms around each other might have even softened their homicidal appetites. It would have been splendid.

See, Dave’s as cuddly as he is cerebral.

You’d have to be a zombie to not love a guy like that.