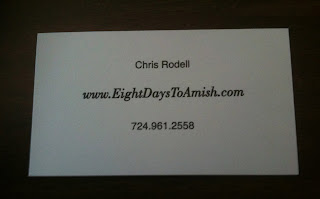 I revealed the snazzy new business card to Josie, 10, with all the flair of a Vegas magician removing a hippo from a hat.
What did she think?
“BOR-ing.”
I told her she’s confusing BOR-ing with ENIG-matic, and I’d have explained just what enigmatic meant if she hadn’t instinctively turned back to the hi-def broadcast of the Disney Channel that is everything my new cards are not.
I wonder if my daughter’s creative sensibilities would be more refined if I spent half as much time fathering as I devoted to the blog.
It’s pure speculation because I’ll not turn my back on the blog.
Unlike my offspring, the blog’s never said I'm boring, smell bad or embarrass it around its prissy blog friends.
If the blog could just run out and play catch with me, it’d be the son I never had.
Alas, it was only the second blog-related disappointment in so many days.
See, June was a milestone month for www.EightDaysToAmish.com.
Regular readers -- and your numbers are growing -- realize the blog output has dramatically increased.
I gauged from the enthusiasm I hear that readers would welcome more.
So starting in late May, I began producing more while maintaining the same rough format. The word count for each item is still about 650 words.
The difference between my blog and so much other internet content is I’m seeking readers who actually read.
I’ve never posted a video and the pictures are like postage stamps that may or may not illustrate what’s actually going on.
I see some very successful blogs that that simply post pictures of their dogs with clever captions.
If it were up to me, I’d petition the Greater Blog Counsel to revoke their blogging licenses.
Of all my writing enterprises, the one that pays the least -- this blog -- provides the most satisfaction. And now I’m becoming convinced this will be one of the breakout blogs that actually starts earning money.
I just don’t know when.
But the numbers are starting to impress.
I’ve noted before how unreliable the Google “stats” page is. There are often times when stats registers three distinct page views, but the stats audience section shows there are 10 readers in America, four in Denmark and two in Iran.
Iran! Can you believe it?
It’s true. I have a small but steady constituency of readers in Iran.
I can only dream one of them is Supreme Leader Ali Khamenei and that one day he institutes sweeping liberal reforms and says he was moved to do so by the wisdoms he read at www.EightDaysToAmish.com.
I have to think that would move the meter.
But that’s just one reason why June was such an interesting month.
As you can see to the right, stats tallies the number of page views since 10/10/10 (I opted for calendar cool to commence the tally).
What you can’t see is the page views are broken down into all-time, monthly, daily and current categories.
It tells me that January had 1,718 page views. The number was approached but not exceeded throughout 2011.
Until June.
June page views smashed that number at about Day 20. As the month wound down, I aspired to a nice, round number: 2,500.
On the morning of June 29, I needed just 79 page views.
For a blog that had been averaging 85 a day and with two lively topics on deck, it seemed a cinch.
It was not to be. The next two days I became like the guest of honor at a surprise party no one bothered to attend.
Was it the holiday? Topic selection? Had my evil daughter used Facebook to poison my readership?
I don’t know. But as the clock ticked down on June, my page views for the month froze at 2,487.
It seemed to me as if the great Roberto Clemente had gone on his 1972 mercy mission and greater glory with 2,999 career hits.
My ludicrous analogies make up in color for what my black and white business cards lack.
I vow it won’t happen again.
I’m going to do something that goes against the ethos of a blog deliberately named to hearken plain living.
I’m going to start promoting.
I have 1,000 new business cards. If you’re a fan of the blog and are so disposed, please e-mail me (storyteller@chrisrodell.com) and I’ll send you a score or so you can distribute to like-minded friends who might enjoy these musings.
I’ll be grateful.
And if the blog ever starts earning real money I’ll send you something snazzier than an envelope full of the world’s most BOR-ring business cards.*
* Offer applies to all general readers and clerical leaders of repressive fundamentalist Middle Eastern nations that begin with the letter “I.”
Posted by Chris Rodell at 4:36 PM