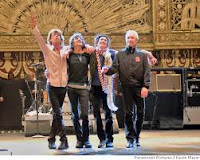 Most of the questions made it sound as if I were overdue to drop a baby that was expected in March.

“Man, you should see a doctor. Something’s wrong with you.”

Everywhere I went, the whole town reacted with concern. Me, the second most famous golfer in Latrobe, hadn’t played once in 2011.

This was unsettling to a town still smarting from the owners of Rolling Rock moving the fabled beer-making operations from Latrobe, land of the mountain spring waters, to New Jersey, land of the chemical factory spill ponds.

I’ve been in a recreational funk. I just sort of stopped caring. I wasn’t playing good last year and this year started with my mother requiring lots of my on-going attention.

I figured if I couldn’t play well and didn’t have the time to devote to improvement, why bother?

I thought about seeking counsel from the town’s most famous golfer, the legendary Arnold Palmer.

I thought about approaching him and saying, “Arnie, I’m all out of sorts. I don’t feel like golfing. I’m going through a tough time and I need the advice only a truly legendary golfer and man like yourself can provide. In this, my hour of golfing need, what should I do to shake this awful funk?”

But I knew exactly what he’d say: “Who are you? Do I know you from someplace?”

That’s a joke. We are friends. And that applies its own sort of pressure.

People everywhere not only expect me to golf, but to golf well.

They know through the course of about 50 interviews Palmer and I have become chummy (that remains one of the coolest things there is to know about me).

I have accumulated some renown for my Palmer associations, my golf books and related contributions.

It was just last summer I was invited to a golf gala at Latrobe Country Club featuring legendary Pittsburgh broadcaster Bill Hillgrove.

Hillgrove and I golfed together and were seated at the main table during the awards dinner.

Prior to the food being served, the esteemed emcee stood up and announced to the 150 or so golfers, “We have two very special guests here tonight. First is Bill Hillgrove, announcer for the Pittsburgh Steelers!”

Well, the place went nuts. Hillgrove enjoys one of the best levels of celebrity recognition. He plays a pivotal role in the town’s love affair with the Steelers and everyone knows he’s just a swell guy.

Hillgrove smiled and gave a friendly wave without getting up.

Then once the Hillgrove tumult finally died down, I was floored when the announcer said, “And you know our other special guest for his golf articles in Arnold Palmer’s Kingdom Magazine. He writes for many popular national publications and he lives right here in Latrobe. Say hello to Chris Rodell!”

Quickly overcoming my surprise, I rose majestically from my seat and gave a big sweeping bow like the kind I’ve seen Mick Jagger do after entertaining stadiums full of 70,000 delirious Stones fans.

I didn’t stop bowing and sit down for 10 awkward minutes until the waitress set a shrimp plate in front of me.

I’ve been invited back, but they don’t introduce me anymore, and as soon as I walk through the door someone hands me a shrimp plate.

Still, the pressure and the itch to golf became too great. The game’s brought me so much soulful joy and laughter. I missed it too much.

So I snuck out to a little local course late last Sunday night.

I’m a natural! I played great!

This overdue baby’s back.

I feel like a great weight has been lifted off my shoulders and, hence, the entire town of Latrobe’s.

I close my eyes to bask in the imaginary applause and do the only thing that comes more naturally to me than swinging a golf club.

I bow. Again and again.

Sure, some of that’s massive ego, but I’m mostly hoping someone will show up with some shrimp.

Glad you got back out there! Dave hasn't golfed this year either and he is going with Matt and his friends for the first phase of a bachelor party on Sat morning. Hope he does well!

How'd it go for Dave? Good I hope. I really missed playing and have been out three times in the past two weeks.

I don't take it seriously and always try and have fun. Kind of like life!