Conservatives illuminating only own ignorance 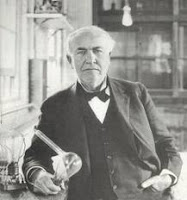 I may not agree with all their wacky views, but I can understand conservatives getting in their typical purple-faced tizzies over things like gay marriage and keeping government out of our lives.

These are bedrock conservative issues.

Yes, the party that’s opposed to government intervention is ceaseless in its defense of personal liberty until it comes to issues like who’s rocking whose bed.

But when did conservatives become so opposed to conservation?

It makes me nostalgic for days when they used to say things like that about Osama bin Laden.

Yes, these are dark days for light bulbs.

When I heard there was an innovative new light bulb that could save Americans on average $85 a month, I reacted the way an old conservative would have.

I thought, “This will let me conserve about $1,000 a year on electric bills.”

That I vowed to lavish the savings on donations to ultra-liberal organizations like the Sierra Club didn’t diminish the initial conservative motivation.

When exactly did the conservative movement begin to lose its mind?

The federal energy legislation that has them frothing was championed and signed by George W. Bush in 2007. It didn’t infuriate them then.

Was it when they were revealed to be so wrong about each and every aspect of the misguided $3 trillion Iraq War, the most costly and wasteful government program in American history?

Was it when they realized that eight years of conservative rule didn’t lead to panacea, but led instead to the election of America’s first black president, a man they despise?

The debt ceiling crisis has all the experts terrified -- and Michele Bachmann’s not an expert.

Here’s what’s going the happen: Fiscally-minded grown ups of the conservative movement are going to begin exerting pressure to get a deal done. It’s already happening with Mitch McConnell.

Republican negotiators are going to cave because President Obama’s looking like the adult here.

Then Tea Party conservatives will do what they do best: They will become furious, only this time the sum of their wrath will be directed at inter-party allies.

That means the party will nominate the most extreme candidate from the most dysfunctional slate of presidential aspirants either party has ever considered.

The best candidate, the one who could engage voters from both parties, is Mitt Romney, a man so earnest he makes me wish I could get him drunk and passed out long enough to draw Sharpie eyebrows on his forehead before his next candidate debate.

But he’s a magic underpants-wearing Mormon and that won’t fly with primary voters in places like South Carolina.

If his complexion was just a shade darker they’d be demanding he produce his birth certificate.

That’s why I’m comfortable predicting the nominee will be reactionary Texas Governor Rick Perry. Yes, the man who recently mentioned seceding Texas from the union will soon be campaigning to run the country he considered abandoning.

Perry recently signed a law exempting Texas from the Bush energy and light bulb standards and is seeking manufacturers who -- yee! haw! -- come to Texas to open a plant making bulbs the old-fashioned Edison way.

The idea was mocked by Bob Keefe of the Natural Resources Defense Council that argues on behalf of conserving our resources.

“It’s pretty unlikely any manufacturers are going to be rushing to Texas to make a product based on technology that’s 125 years old, is highly inefficient and is something the majority of consumers have widely said they’d don’t want.”

It’s just what we’ve come to expect from a movement that’s increasingly being led into the darkness by a bunch of inefficient dim bulbs.

Here's an idea - get a job. You know, a real job, where you have to be at the office on time every day.

You'll find yourself stumbling from the shower to the closet every morning, flicking a switch, and getting...nothing.

These fluorescent bulbs take longer than the real morning dawn to get to a useful level of light. (That's a long time, if you've never been up that early, although I suspect you may have been up that late once or twice.)

And when it does warm up, the light is so bad that black, brown and navy blue all look the shade of charcoal gray. So does charcoal gray. Nothing like getting to the car and noticing you're wearing your blue-stripe shirt with dark brown pants.

And forget about your donations to the Sierra club. Your savings (if any - you may just leave the damn light on all the time, thereby using more energy) are used up-front when you're paying seven bucks for a light bulb. Dimmer bulbs can set you back twenty.

But other than that I guess they're OK.

Thanks for the lively comment, John. You make some good points.

Plus, this is being tagged as anti-Obama when it was brought about by Bush in 2007.

I do appreciate your taking the time for reading. Keeps me on my toes know people with whom I disagree are ready to make thoughtful counterpoints.

FYI the "get a job" stuff was tongue-in-cheek. I should've mentioned that as I don't know you personally. You take shots at yourself so I figured you wouldn't have a problem with it.

You can be a conservative without the desire to conserve everything. Similarly, we call some people liberals, but that doesn't mean that they look at prisons and actually want to liberate everyone...oh wait...yes they do...bad example...but you get the idea.

According to wiki (i.e. probably wrong) conservatism is a "political and social philosophy that promotes the maintenance of traditional institutions and supports, but believes that endangered species make tasy hors d'oeuvres(1)."(2) So conservatism refers to human institutions, not nature.

Regarding Bush - you libs say he didn't read anything that came across his desk anyway, so why would I blame him???

*2: OK, I added that second part, but considering the liberal bias and lack of control at wikipedia, give it six months and it will probably be there.

I got that jab, John. I could tell you were joking. It's all fair game here, too. As you say, I can't duck that one about needing a job!

That's a hilarious wikepedia entry, especially with your addition!

I like talking about politics, but not arguing about it. I'm glad you can bring a funny and philosophical POV to the table.

Thanks again for reading and taking the time to add thoughtful comments!

I like to think that's being provocative. I like to think I often point out the folly of my positions, too. I certainly am happy that conservative readers are occasionally engaged here.

We should all be able to take it as well as dish it out. Nothing I say is any worse than what's heard tossed in my direction.

I mentioned in the post about Murdoch that my inspiration for writing was Mike Royko. That's a standard any topical blogger should aspire too. He came at every issue from the liberal slant, but he was just as tough on liberals and himself as he was on them.

I hope I can do the same.

I agree that it's provocative - that's exactly my point. One tends to provoke an argument, not a discussion. And I'm not saying that's a bad thing. But it's disingenuous to be provocative, but then claim to only be interested in discussion. It's a typical liberal tactic.

Okay, my head's starting to hurt. Go ahead and have the last word to gain that smarty-pants satisfaction Tea Party whack jobs seem to crave.

OK - Rupert Murdoch could have kicked Mike Royko's ass...and so could his wife!