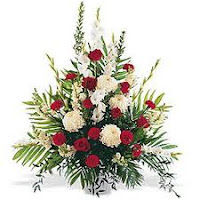 Death is topically evergreen, I’m doing it with a cheerful heart and my intentions are pure, so writing again about death, well, it won’t kill me.

I live in one of those small towns where the daily obituaries are crowded with friendlies, church acquaintances and kin of people who fix our cars, our furnaces, etc.

Live here long enough and attending funerals becomes as ritualistic for some people as Bingo Night down at the VFW.

There was a big funeral here last night and the whole town turned out. The woman and her family are beloved and at 62 she died way too soon. Karen will be missed.

I was talking with some friends about it earlier in the day. One man said he wasn’t going to attend.

“It’s going to be too crowded. I’ll just send the family a ham on Monday.”

I said I admired him for his indifference to both grieving convention and doctor-recommended dietary considerations regarding the leading causes of high blood pressure.

Another friend said it drove him crazy when many people sought to console him about the death of his parents by telling him they were in a better place.

“How the hell would they know?”

He’s right. Murrysville may have better schools but if the NFL lockout is resolved Steeler training camp will again be here at St. Vincent College through August and that’s always a fun time to be in Latrobe.

So thoughts of proper etiquette were on my mind as we waited in the long line to pay our respects.

Lucy’s just 5 and I was worried the experience might unsettle this impetuous kid. I figured I’d better lay down some funeral ground rules.

First: don’t try and stick anything up Mrs. D’s nose. She’s unlikely to react the way I do when you try shoving crayons up mine when I’m sleeping, but that doesn’t mean it’s right.

Do not sneak behind the coffin and start shouting in your little cartoon voice, “Help! I’m not dead yet! Get me a doctor! Help!” Sure, it’d be funny, but it would likely offend stuffy traditionalists.

I told her not to remove from the coffin anything shiny she thought was pretty, to pinch the body or yell, “Boo!” an inch from the deceased’s ear.

The family was delighted to see me. I could tell because they immediately began to insult my hair, my sobriety and the way I was dressed. One sarcastically said it was “real classy” of me to wear a bowling shirt to his mother’s funeral.

(It wasn’t a bowling shirt. It was “recreational sportswear.” Val talked me out of wearing an actual bowling shirt because she said it wouldn’t look real classy.)

The ridicule was so intense I briefly considered faking a massive heart attack just so they’d be forced to say nice things about me in the hopes I might revive and not upstage their mom’s funeral.

I did nothing of the sort. It would have been very poor funeral etiquette.

And I knew Lucy might reach for the crayons in Val’s purse and jam one up my nostril. My antics would exposed as fraud.

EMTs should keep a box of Crayolas in their lifesaving kits. I swear they work better than -- “Clear!” -- those high-voltage defibrillators.

I’m glad I live among a people resilient enough to prevent even the saddest of occasions from taking the fun out f-u-n-erals.

I guess I should have encouraged Lucy do her macabre ventriloquist act behind the coffin.

Everyone would have had a good laugh.

I know Karen would have.
Posted by Chris Rodell at 10:14 AM