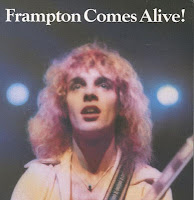 1. I met him in 2000 at a New Orleans entertainment conference I was assigned to cover. We talked for about 10 minutes and he couldn’t have been more friendly, funny or cool. Having met him, my ears always perk up when I hear one of his songs or news about him. He’s touring the country playing the entire “Frampton Comes Alive!” for its 35th anniversary. Here’s some other things about Frampton you may not have known.

2. He’s buddies with Tone-Loc. As I was chatting with Frampton, the singer of the 1980s hits, “Funky Cold Medina” and “Wild Thing” walked by and the two exchanged warm hellos. I talked to Tone later, too and he was cool, too. My wife was thrilled when I brought her back an autograph. I think she kept it about a week.

3. Director Cameron Crowe said the look on Frampton’s face on the album cover looks identical to a man who’d just been shot into outer space.

4. The album was so popular that Mike Myers’s Wayne character joked in “Wayne’s World 2 that “if you lived in the suburbs you were issued it. It came in the mail with samples of Tide.”

6. Frampton won a Grammy for a 2006 instrumental album called “Fingerprints.”

7. “Frampton Comes Alive!” was on the Billboard 200 for 97 weeks, of which 55 were in the top 40, of which 10 were at the top. With sales of 6 million copies it became the biggest selling live album. More than three decades later, the album is still the fourth biggest live seller.

9. Besides Los Angeles and New York, he’s also spent many years living in Nashville and Cincinnati.

10. The 9/11 attacks moved him to become an American citizen.

11. He was born in Beckenham, Kent, England, on April 22, 1950. Fifty-five years later, one of his daughters (he has four children) graduated with a fashion merchandising degree from Kent State University, in Kent, Ohio, which couldn’t be more different from Kent, England.

12. He is a strict vegetarian.

13. He suffered a near-fatal automobile accident in the Bahamas in 1978. Dealing with the severe pain led to a brief period of drug abuse.

14. “Frampton Comes Alive!” was a double album with a special reduced list price of $7.98, only $1.00 more than the standard $6.98 of most single-disc albums in 1976. Here’s some interesting thoughtfulness: The album was pressed with sides one and four on one record, followed by sides two and three on the other. This arrangement was intended to make it easier to listen through the whole album in sequence on automatic record changers. Remember those days of waiting for the needle to hit the groove. I love the convenience of digital, but sometimes I still miss the sublime expectation of waiting for the needle to find the groove.

15. The follow-up to the mega hit was the widely-panned 1977’s “I’m in You.” I guess I’ll never make a good critic because I still like it. Mick Jagger lends back-up vocals on both the title song and the great “Tried to Love” and Stevie Wonder plays harmonica on “Rocky’s Hot Club."

16. Tone-Loc and Frampton should get together for one of those oddball collaborations that make all the critics giddy. I’ll bet it would be a huge hit.