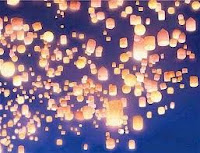 NASA worry warts are once again saying the sky is falling, and this time they may be right.

The once-pristine heavens are starting to resemble Earth’s trash-strewn streets.

Experts estimate somewhere between 100,000 and 500,000 objects larger than a centimeter (half an inch) are in Earth orbit. At orbital speeds of up to 17,500 mph, even a space bottle cap destroy a satellite or the manned space station.

The gist of the news is there’s too much junk in space to which I respond: Garbage.

In fact, there’s not nearly enough trash in space.

We need to think of creative ways to litter space with our litter.

We have way too much trash here on earth, both land and sea (check out my Great Pacific Garbage Patch post).

I see it everyday on my two-mile strolls through small town America.

I vowed long ago I’d pick up and dispose of any trash carelessly left in my path, and just in my path. I would not go out of my way to pick up debris in the gutter or caught in the shrubs.

There’s just too much. Weaving to pick it all up would take too long and observers would mistake me for a stumbling drunk about six or seven hours before I actually become one.

It’s on these walks when I think about how I can solve the world’s most pressing problems.

And I keep coming back to ways to launch our trash into space.

There’s nothing deceptive about the name Space. Space is what fills up a totally empty closet. Except in the case of Space there’s a whole bunch more of it.

Space is space. It is empty. There’s nothing there there.

That’s why words like landfill drive me insane. Land is land that’s already full of land. You can’t further fill it. You can only pile all our unsightly crap up on top of it.

Space is something that needs filling.

That’s one reason why being an astronaut in an unhappy marriage is so convenient.

When an astronaut says he needs some space, he (or she) can really truly get some.

So what’s to be done with all this trash and all that space?

Ideally, someone will invent a machine that will transform all our trash into ozone. That way some future space craft can fly into orbit and just empty the boxes full of artificial ozone where all the natural stuff used to be.

But that may be years off, at least until the geniuses at Apple get bored figuring out ways I can carry 20,000 songs, rather than a measly 15,000, in my pocket and decide to do something sensible.

Another solution is to equip every piece of disposable trash with a really tiny little rocket that would ignite after a detector signaled the waste had become trash.

The innovation would have the added benefit of keeping snoozing airline pilots in a lively enough state to dodge skies filled with projectiles.

Less expensive might be the application of a new generation of super magnets. Again, all disposable items would be implanted with tiny powerful magnets that could be activated when the human touch goes undetected.

They’d work in concert with a Rhode Island-sized magnet orbiting the earth. Every few weeks this magnet would sail overhead and all the trash on the streets would magically rise to heaven.

It would be a beautiful phenomenon reminiscent of the above-pictured rising lamp scene in the captivating Rapunzel movie “Tangled” (see it, now! It’s wonderful! Honest!).

The magnets would also clear up all the pesky space junk endangering all the crewcut bores so devoted to tending International Space Station ant farms.

Sadly, those are likely solutions that will be enjoyed by our children’s children.

See, I’ve come to realize the men and women who could make this stuff happen lag in the kind of creative thinking readers of this blog enjoy basking in -- God bless each and every one you.

Just imagine the scorn they’d heap on me if I ever tried to bring these ideas to our corporate big shots.

They’d say I was nuts. Crazy.

They’d say the same things about me they said about Galileo when he was ridiculed for the then-heresy of declaring earth revolved around the sun.

I like to think me and the historic genius have at least one thing in common.