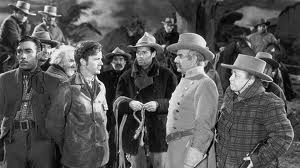 The abundance of sensational violent crime in America is so vast it’s had me pinball from being pro-death penalty back to being staunchly anti-death penalty in just six days flat.
I’ve been opposed to the death penalty since the latter part of the 19th century.
True, that was about 100 years before I was born, but when it comes to the great moral issues I have a very old soul.
I’m talking about “The Oxbow Incident,” a 1943 Western starring Henry Fonda. It’s about a bloodthirsty lynch mob that hangs three suspicious strangers out of vengeance for the murder of a beloved local rancher.
It’s a very satisfying judicial outcome for the ad hoc prosecutorial team, all bluster, booze and tobaccy spit.
As mobs often do, they head straight to the saloon to celebrate when they meet the local lawman and commence to bragging.
That’s when the stunned sheriff says, boys, there’s been a mistake. That rancher’s not dead.
Actually, there’d been at least four mistakes.
It’s an odd, somewhat stilted film, but highly compelling.
I tend to think about it whenever the local lynch mob starts getting bloodthirsty. I try and break down every death penalty case as either “Oxbow” or “Not Oxbow.”
Richard Poplawski came down squarely in the “Not Oxbow” category.
He gunned down three Pittsburgh police officers in a brutal 2009 ambush. He confessed to it. Bragged about it.
It devastated the community.
My skin crawled every time I read a news story that included the dainty modifier “alleged” cop killer.
He was sentenced to death last Wednesday and my first reaction was, well, what took you so long?
He’s more likely to die of old age than lethal injection and his death row incarceration and innumerable appeals will cost more millions.
And every time I read about his miserable existence, I’ll think this all could have been settled long ago by a boozed up posse of local hotheads.
Now we have the Casey Anthony verdict. People are outraged. They want vengeance.
Me, I’m playing catch up. I only watch celebrity crime news when it involves actual celebrities.
Anthony’s a manufactured celebrity. She’s created by media that need hot young women/men to kill/rob/neglect angelic innocents to compete in the ratings with popular network crime shows about hot young women/men who kill/rob/neglect angelic innocents.
So I wasn’t invested in this one the way so much of America is.
But despite all the sensational evidence, there was something about the hoopla that had me thinking, “Oxbow.”
In this case, I have to put my faith in a unanimous jury verdict.
Getting 12 strangers in polarized America to agree on anything is newsworthy. To get 12 of them to agree on a death penalty murder trial is stupendous.
Heck, I can’t get four people in my house to agree on what kind of toppings to put on the pizza.
So now after a brief fling with frontier justice, I’ve returned to my bedrock conviction that the death penalty in America is all wrong.
It doesn’t deter. It’s too expensive. It clogs the courts. And if you judge by the number of convictions overturned by DNA evidence or sloppy police work, it’s too often wrong.
Dead wrong.
I’m once again content leaving god-like life and death decisions to the one who most fits the description God like.
I understand the outrage over the Anthony verdict. I pray one day we’ll all recognize justice.
But this posse can ride without me.
Posted by Chris Rodell at 9:51 AM