Where I'll be speaking next 6 weeks 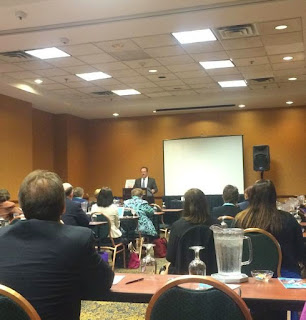 As far as exotics go, it’s not exactly The Stones touring South America, is it? I mean, no offense, but Altoona, Reynoldsville and Wheeling aren’t Buenos Aires, Sao Paulo and Rio.

Of course when The Stones were just getting started, they, in fact, played little old West View Park in Pittsburgh on — anniversary alert! — June 17, 1964. The park’s been long closed but it was once very popular. My parents used to go there.

Mom could have met Mick!

That would have been cool, as long as they never wrote a song about shagging a Pittsburgh groupie named Rachel Mae.

In the past year, my “Use All The Crayons!” talks have taken me to Omaha, Richmond, and all over Pennsylvania.

I’ve spoken to teachers, students, librarians, hoteliers, restaurateurs, financiers, meeting planners, credit administrators and, oh, maybe 200 or so incidental banquet table bussers who probably didn’t give a crap what I had to say.

But more than a thousand others did.

They cheered, they laughed, some cried. I tell ya, it’s a dandy little speech. I think the reason for that is it’s becoming apparent I’ve led a dandy little life.

As a writer, I’ve met and become friends with some of the most interesting people on the planet. They’re Guinness Book of World Record holders, they’ve survived multiple lightning strikes, plane wrecks or won $200 million and pissed it all away in one glorious summer.

Victory, failure, joy, heartbreak, humor — these are what my talks are all about.

Heck, that’s what life is all about.

The reaction to my talks has been the most surprising and gratifying aspect of my entire career.

To find at age 50 I have a gift for entertaining public speaking was a watershed. It opens up so many doors.

Have there been any bombs?

Starting out, I needed a podium and a page of notes, more of a reminder set list really. I was too inexperienced to overcome a logistical curve ball.

So if I showed up and there was no podium, I struggled. That’s what happened in front of 200 Elizabeth Forward 8th graders, a talk I was able to salvage with a strong finish.

Same thing happened in Richmond, only it was in front of about 100 unforgiving meeting planners. That’s a long way to drive to bomb.

But bomb I did. I remember marching back and forth across the stage — babbling, really —  relieved they’d cleared the tables of cutlery.

I’d committed the worst offense any speaker could: I’d bored them with incoherence.

But it’s true. You learn more from failures. I don’t think I was unprepared, but I was never again less than wholly prepared.

It’s hard to pick which one went best. Maybe it was the Pennsylvania Restaurant & Lodging Association morning keynote where the formerly queasy restauranteur said I cured his hangover and made everyone happy to be human.

Or maybe it was a the keynote to 250 Pennsylvania Librarians at The Penn Stater Hotel and Conference Center in State College. It was the biggest room I’d ever spoken in. Just huge.

And it couldn’t have gone better.

That’s not me talking.

It’s what the meeting planner told me.

“That couldn’t have gone better,” she said.

How, I asked, can I improve?

“You can’t,” she said. “Everything’s perfect. Don’t change a word. You have the message everyone needs to hear and you convey it in a way that’s delightful.”

Good thing my life is still rife enough with failure to keep that kind of praise from going straight to my head.

In fact, my delivery can still improve.

The nice thing is some friends are starting to feel comfortable recommending me to their groups. I relish their vote of confidence.

Of course, there are friends who disparage. They’d pay me to keep my mouth shut.

Pay me to talk or pay me to keep quiet.

Shall we start the bidding?

My compliments: My day with the PR&LA

Email ThisBlogThis!Share to TwitterShare to FacebookShare to Pinterest
Labels: Chris Rodell, Pittsburgh books, Pittsburgh speakers, speaking, Use All The Crayons

Watch the video that i'm going to share with you if you want to know how you can find the best surgeon of hair transplant in Canada. Best Hair Transplant Surgeon In Canada