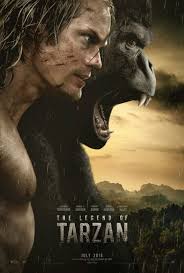 I had to blink the surreal right out of my eyes when a news story about a Cincinnati boy who chose to play with gorillas was followed up by a commercial for the new film about a boy who’s been raised by apes.

Now, I’m wondering if it was all a stunt gone horribly wrong.

I mean, they haven’t released the name of the zoo boy, but if it turns out to be Tarzan I’m going to be mighty suspicious.

The Tarzan character created in 1912 by Edgar Rice Burroughs is one of the most popular figures in all literature.

Not so much the kid from Cincinnati.

He’s getting death threats. And many people are blaming the parents.

They didn’t have control over their child. He behaved recklessly. They should have taught him about consequences.

I’m talking about Harambe the gorilla’s parents, of course.

Harambe was 17. What responsible zoo gorilla parents wouldn’t have by now had “the talk” with him?

“Now, son, we may be king of the jungle, but here in the Cincinnati Zoo we’re not even as popular as those stuck-up giraffes, the ones who always have their noses in the air. And I mean way up in the air.

“But this you must understand above all else: stay far away from every human creature. That means the ones who feed us and care for us and try to make our environment as as similar to our native Kenya as a densely populated southwestern Ohio region permits. And it’ll likely never happen, but if by chance some precocious child climbs into our enclosure, stay far, far away from him. Don’t try and play with him, pat his head or cuddle him. Despite your best intentions, the boy will get hurt and they’ll shoot you dead.

“Oh, and if I ever catch you texting while driving you’re going straight to bed without your bamboo.”

These are magnificent and intelligent beasts. I don’t think the scenario I present is too outrageous — all but the part of gorillas driving motor vehicles.

Your typical 500-pound gorilla would never fit behind the wheel of a Prius — and you know gorillas go green so Prius is the only option.

It’s a pity, but of course they had to shoot Harambe.

And I’ll not join the posse out to persecute the boy and his family or the zoo.

I think this be the revelation when the family succumbs to pressures to sit down and talk with star interviewers like Diane Sawyer.

I'm truly hoping she’ll ask (she won’t) if they plan on seeing “Tarzan.” I can’t help but think the kid will see it at some point this summer and think, gee, what might have been.

It’s probably the script many of the avid Harambe mourners had hoped would have happened at the zoo. The gorilla’s behavior seems benevolent and caring.

But who knows? In another minute he may have wanted to see if the boy could fly.

The episode has me thinking of the times my our own parenting could be questioned.

Like the time our daughter was about 8 months old and I was getting drunk at B.C. Kenly’s tavern in Latrobe.

And I was being the responsible one!

Val was at home with the baby and happened to be cleaning the house. We had a stupid cat at the time and she’d put the dirty litter box on the floor in the dining room.

The baby was sleeping in the car seat on the dining room table. And, horrors, she wasn’t buckled in.

So at some point dear Josie woke up and leaned forward. Somehow the inertia of the move tipped the rocker seat and over she went.

Face first into the litter box!

I’ll never forget that panicky call (and I’ll never let her forget it either).

The litter was in the baby’s mouth, her eyes, her hair. Yuck. Val was calling 911.

And I hope one day to meet a 911 operator and ask about their most unusual calls. It’s bound to be hilarious.

Of course, the baby was fine. Mommy was more of mess. She felt terrible, certainly the way the Cinci mom must.

In hindsight, I’m relieved Val didn’t decide to change the litter box while outside the gorilla enclosure at the Pittsburgh zoo.

Yes, it’s tragic the animal had to die. But I’m glad the boy didn’t get killed.

It is this: Parents need to take every precaution to see that something like this never happens again. We need protection.

Because these things will continue to happen for as long as men and women continue to  have children.