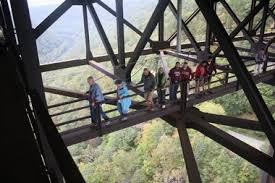 It was the kind of unsightly trash a devoted recycler like myself would instinctively take a few steps out of his way to retrieve for proper disposal. I do this especially when, as in this case, it’s in a national park spoiling one of the most spectacular views in America.

But I didn’t budge.

It was a six-pack of 12-ounce Corona glass bottles. Four of the beers had been emptied. Two full ones remained.

I stood there and tried to recall the number of times I’d have wandered 15 steps just for two free Coronas. It was a bunch.

I was in the middle of the 6/10-mile long, 24-inch maintenance catwalk suspended 20-feet beneath the New River Gorge Bridge, near Fayetteville, West Virginia.

The beers had been drunk and left there the previous week by a forlorn young man who’d come to that exact spot to end his life.

“He’d broken undetected through all our security measures and walked out onto the middle of bridge and hopped the railing onto this beam,” said Jada, our guide, a pretty WVU Eastern Religious Studies major who’s about to depart for two months of primary studies in Cambodia and Vietnam. “He climbed out to the edge, sat down right there and started getting drunk. He was intent on jumping.”

She told us that and I wondered what some Hindu prophet would say about trying to penetrate the earthly veil by hurtling oneself off one of America’s landmark bridges.

Prior to 1977, it used to take U.S. Rt. 19 motorists 45 minutes to traverse the canyon-pinched New River, along with the nearby Gauley, are among the top white water rafting sites in the world. Today, thanks to the bridge, crossing takes 16,200 or so motorists each day just about 45 seconds. It was until 2002 the world’s highest vehicular bridge.

Yet for all its majesty, it still fits snug in your pocket.

The bridge profile is featured on the back of the 2005 commemorative West Virginia State quarter.

I’d written about the Bridge Walk in ’11 after it’d opened as one of the most unique tourist attractions in all America.

The 24-inch catwalk had for years been a rite-of-passage for local kids wanting to test their mettle. They’d sneak out there and maybe spray paint their names on the beams.

Then in 2010 local entrepreneur Benjy Simpson and five associates secured permission to add $1 million in unobtrusive safety features into the barren passage and on Sept. 26, 2010, opened Bridge Walk. A one-way trip costs $73.

“We’ve had every age from 9- to 95-years-old cross and we’ve had people in wheelchairs,” says Simpson. “Most are there for scenery or are engineering buffs marveling at the construction and many are people trying to overcome a fear of heights. We’ve had about 22,000 guests cross the bridge. Of them, only 70 have turned back.”

Physically, Bridge Walk is unimposing to anyone capable of a strolling a leisurely mile. Walkers are given harnesses and tethered to overhead steel cables.

I’m not going to lie. I was scared the whole way.

I’m one of those guys who has no senseless fear of heights, but a dreadful fear of falling from high places, which I contend is different and makes perfect sense.

I’ve twice gone skydiving and in ’13 did a 102-story static-line leap from the Stratosphere SkyJump in Las Vegas.

I enjoy testing my nerves, but even more enjoy saying I’ve tested my nerves. I love being able to tell stories about adventures others say they’d rather avoid.

Bridge Walk is a perfect example. I know things can go wrong — even though they have never not once on Bridge Walk. And it’s indelible views are, indeed, spectacular.

Josie, being naive about dramatic death, has no fear whatsoever. She skipped along, used the railings for push-ups and was serene in her assurance that nothing could possibly go wrong.

I’d told here the bridge was a popular site for couples to get engaged. Until Jada showed us the castoff Coronas, it never dawned on her something so magnificent could be used as a place for something so dark.

“We don’t know how much he’d drunk before he got there, but at some point after he’d drunk that fourth beer he changed his mind,” Jada said. “He wasn’t going to jump. He didn’t want to die.”

It was an inconvenient place to have such a dramatic change of heart. He became immobilized by fear and alcohol.

He called 911 and explained his predicament. They rushed a crew to the bridge. The clipped in and a very brave first responder did a duty that’ll forever top the stories of the guys who like to brag about the old widow’s kitten they pulled from way up in the big oak.

I tried to put myself in the shoes of the men on the bridge that night and concluded my feet would have been damp.

In either case, I’m sure I’d have wet my pants.

The would-be suicide had to be in frightful condition. He was unstable out on an exposed beam and now consumed with both alcohol and a frantic will to live. One stumble in either direction and he falls the equivalent of the Washington Monument with the Statue of Liberty balanced on top.

The hero had to be nervous, too. He’d taken all the proper precautions, sure, but he was dealing with a drunken wildcard. What if it were a cruel ruse to try and take an innocent with him?

Me, at that height I was too nervous to remove my phone from my buttoned pocket to even snap a telltale picture of the trash, which had been left there because the rescuer was too otherwise occupied care about housekeeping matters.

A conspiracy-mined friend said he wondered if the Bridge Walk people planted the trash and came up with a crafty story.

Sure, anything’s possible, but it isn’t in the best interest of Bridge Walk to do anything that is tantamount to encouraging such lethal lawlessness.

And I don’t know much about Eastern Religions, but I’m sure they include a part about how unethical it would be for Jada to lie to visiting travel writers.

Later, I couldn’t stop thinking about the would-be suicide. I figured it must have been over a broken heart. I wondered about his thought progression as he went through his four beers.

Beer 1: “There’s no hope. This heart break will never heal. This is the only solution.”

Beer 2:  “Well, I’ve made some bad decisions, but I’m glad I got a premium import to soothe my final moments instead of that domestic swill I usually drink.”

Beer 3: “I wonder if this was a mistake. The Pirates are playing the Giants tonight. First pitch is in one hour. The game’ll be on down at the bar. I think Brenda’s working tonight. She was looking fine last week.”

Beer 4: “I want to live! Live! Live! Boy, am I glad I remembered to charge my phone before I came up here …”

It’d be great if we eventually hear how right there on the edge of that iconic bridge, the man’s life turned right around, that he found love, stability and the messianic will to became a role model for all the troubled strugglers who fail to realize that even the darkest day is still just one day.

Because a man-made structure as impressive as the New River Gorge Bridge should never be about anything other than the enduring grandeur of the human spirit.

It’s out of my realm, but it seems to me the story has all the elements you’d need for a really dandy Corona beer commercial.

New River Gorge Bridge stuns from above and below