Use rice if phone falls into toilet (from '14) 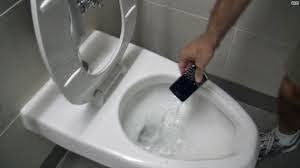