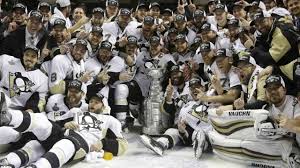 Page one editors at my old newspaper made a mistake in today’s editions: They chose darkness over light.

The darkness is the Orlando shootings.

The light is the Penguins last night winning their fourth Stanley Cup.

The front page was given over to the shooting. There was a huge picture of the mayhem, a scary headline and a big block of print recounting all the gory details.

There was a tiny overwhelmed banner at the top noting, yeah, the Pens won. This as the city is delirious with victory.

So I bought the competition instead. The Post-Gazette has the shooting on the top quarter of the page with the lower portion devoted to joyful celebration.

In today’s world, the two must co-exist. We can’t let darkness crowd out the light.

So today’s observations are about both:

• Winning a Stanley Cup is better than winning any other championship in all sports because it’s the victory that’s shared the most. You win a Super Bowl or World Series and it’s great for a week. The buzz from this Pens win will go on all summer. That’s because the iconic cup will be touring western Pennsylvania — the world, in fact — for months. Each player gets to take the cup for a day or two and it goes everywhere. It’ll be at graduation parties, golf courses, picnics, schools, car dealers, taverns. You and I will see social media pictures of our friends with it. Maybe we’ll be in those pictures. We’ll kiss it. We’ll drink from it. Babies not yet born will be placed in it. It’s going to make tens of thousands of people very happy and it’s a happiness we’ll carry with us for the rest of our lives.

• Banning Muslims from coming to America would have as great a chance of stopping the Pulse shooting as banning 20-year-old white misfits who live with their mothers would have had of stopping Sandy Hook.

• Being at Game 5 was as memorable a sporting event as any I’ve attended. There were 20,000 people there. And I’m talking 20,000 people standing outside the building. It’s such a great phenomena. The city sets up a big screen — it’s probably “big” to only about the nearest 2,000 — and people set up lawn chairs and enjoy the camaraderie. Inside was incredible. I’ve never heard a crowd so loud. I spent the day bar-hopping with buddies convinced the Pens would win. Had they won, I’d still be hungover.

• I studiously avoid trying to inject politics into this blog. But if you want to read one on gun control from back when I did, I link below to a ’12 story about the NRA reaction to Sandy Hook and wonder what Wayne LaPierre thinks when he sees Ralphie shoot his eye out in “A Christmas Story.” I’m told it’s very good.

• I told everyone I know I would have loved to have seen the final go seven games, “but only if I could be assured the Pens would win Game 7.” I’m glad it happened last night.

• I’ll never understand how these killers — both foreign and domestic -- think they can get Americans to change our way of life just by killing a few dozen of us. I don’t see any LBGT going straight because of what happened in Pulse.

• My daughter — she’ll be 10 next week — rediscovered those gum band loom kits last week and made me a preposterous black & gold necklace to wear for luck at Game 5. She wondered why I was still wearing it last night when its presumed luck had failed. “Unlucky?” I asked. “One friend gave me a ticket to one of the greatest hockey games in Pittsburgh history. Another friend invited me to stay with him at a downtown hotel on his expense account. I had one of the best days of my life. And I have you for a daughter. It’s the luckiest necklace in the world.”

• Having said that, had the Pens had lost Game 6, I would've ditched the stupid necklace for Game 7.

• It’s impossible to calculate the number of Americans lone wolf killers would have to slay to get me to ever quit living like an American. We have our problems, but this America is still a really great idea.

• I watched the game at Dino’s with Paul and Joe. The girls at home aren’t that into hockey and I relish an opportunity to share this kind of fun with friends among a happy throng. When the rink announcer asked for a moment of silence for the Orlando shooting victims, you could have heard a pin drop in the bar. It was very moving.

• I was thrown out of Dino’s in, I think, ’94 for defying a silly no-hats ban the bar had back then. I made a hilarious popcorn-tossing scene as they frog marched me out the door. I’m glad they’ve either forgotten it or don’t hold a grudge.

• So there we have it, light and dark with light, I hope, prevailing.

We mourn. We celebrate.

May we all drink deeply from the marvelous cup of life anytime it comes our way.

Pens vs. Sharks in Cup (and life)