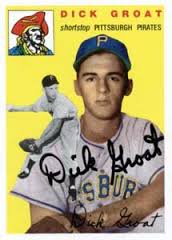 Mental alarm bells went off last week when an eagle-eyed buddy texted me a simple question. He wanted to know my age.

He’s Dave, a very careful and enthusiastic reader. He’s the guy who ceases reading the blog cold turkey for about two months every summer so he’ll have an ample backlog to read in his tree stand every fall while he’s waiting to shoot things like cold turkey.

I knew it. He was playing gotcha.

“So how did you celebrate three World Series titles in your lifetime?”

Ah, yes. He was referring to the following paragraph I wrote when I predicted the Pittsburgh Penguins would beat the San Jose Sharks in five games to win the Stanley Cup:

“Being in a city that’s on a championship run is tremendous fun. No one knows this better than Pittsburgh fans. In my lifetime, I’ve celebrated six Super Bowls, three Stanley Cups and three World Series championships.”

If I’m 53, how could I possibly have been around 56 years ago to celebrate the historic 1960 World Series, the one punctuated by Bill Mazeroski’s walk-off Game 7 homer?

First of all because it’s my blog. I can write whatever the hell I feel like. There’s no prevailing blog authority that’s going to bust in and revoke my blog license. Watch this:

The November 3, 1948, Chicago Tribune was correct: Dewey DID defeat Truman!

Second, in fact, I was there in 1960, three years before I was born — and I don’t mean in one of those Roe vs. Wade life-begins-at-conception ways.

Understand, this was one of the most historic victories in sports.

It’s no exaggeration to say I know more about the 1960 World Series than I do about any of the other 11 championships Pittsburgh’s celebrated in my actual lifetime.

That friend bit is only a slight exaggeration. I have walked into parties where he was and he recognized me and called me by name.

See, Groat, 85, an eight-time MLB All-Star, was the National League MVP in 1960 when he led the league in batting.

And he was my Dad’s buddy.

Groat and teammate Jerry Lynch in 1966 built Champion Lakes G.C. in nearby Bolivar. It’s a terrific golf course. I remember my old man taking me to golf there as a boy never knowing I’d one day raise a family just down the road.

But Dad used to practically levitate when we’d walk into the pro shop and one of his heroes would say, “Hello, Paul, great to see you!”

I can’t count the number of times I’ve sat at the bar with Groat, Maz and scores of other Pirate alumni and heard them tell stories of the 1960 World Series.

So, sorry, Dave, even though I wasn’t born, I was right there on the field the whole time. It’s something I’ll never forget.

I was thinking about this all week because I was surprised when it was pointed out that, despite the many city championships, 1960 was the last major one secured right here in the city.

The rest have all been on the road.

So Thursday has the chance to be special.

Amazingly, I’ll be right there. In the flesh.

Well, in the flesh, but with shabby clothes on.

My buddy Howard called last week with the invite. I’ve known him since high school, but we really became buddies at Ohio University where we were both fraternity brothers and fellow bartenders at the once-fabled Nickelodeon saloon.

I’m not going to say he once held my hair back to keep it from falling into the toilet while I was vomiting, but it was that kind of relationship.

Still, I was stunned when he called and said he had a spare with my name on it.

I instinctively said no. The favor was too enormous.

Took five seconds to change my mind. I remember thinking during the interim, “You’ve always dreamed of being part of a hooligan mob that tipped a PAT bus over on its side. This could be your last chance!”

I predicted last week the series would end in five games.

I hope I don’t die while Pirates are winning …