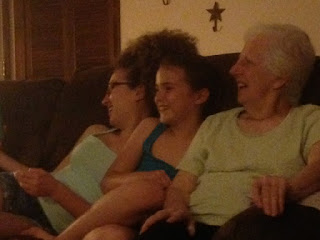 Being the primary care giver for an elderly dementia patient is like walking on a windy day with a beloved balloon at the end of a long string.

You feel like you’re being responsible by holding onto the string, but if a gust carries the balloon off to heaven, do you really care?

We just had Mom, 83, spend two nights with us over the weekend and it was wonderful. She and the girls shared so many laughs. It was so wonderful, in fact, we’re talking about the logistical possibilities of having her move in.

I wonder if I can take it for reasons that may surprise you.

See, Mom’s so sweet it makes me crazy.

I mention her dementia in my “Crayons!” presentations and someone always comes up afterwards to share their experience. Happened again two weeks ago.

“Does she have the nice dementia or the mean one?”

Oh, I said, it’s the nice one. She makes Fred Rogers seem like a sourpuss.

“You’re lucky. My grandmother had the mean one and we all wanted to kill her.”

Yes, I’m very lucky. First of all, because she is my Mom. I credit her with bestowing me with my humor and sense of wonder about life. I have no residual taint from poor parenting. I believe I’m well-adjusted and that’s mostly thanks to her.

Sure, I’m always broke, but I can blame my fun-loving Dad for that so it’s cool.

But Mom was a marvel. People her whole life have always loved her. Still do.
I think it’s because she had was genuinely funny all the time and wickedly sarcastic some of the time.

Now, the wit is gone and all that remains is the kind of sweetness so overpowering I suspect it could cause cancer in lab rats.

Being with her for an hour is like watching a “Little House on the Prairie” marathon speeded up.

She says without any seasonal context that she believes in Santa. Then she’ll say it again. Her memory is shot and the only thing she remembers is to reflexively announce every 10 minutes how beautiful everything is.

So, clearly, creeping dementia’s not only killing her, it’s killing me. Because it’s looking increasingly like the only thing she’s bequeathing to me is her sarcasm.

Being around her for more than an hour unleashes my inner smart ass.

It’s how in July I’ll be taking the family to Minneapolis to see me accept a national award for Acme Lumber Salesman of the Year.

See, I got tired of explaining to her I’m a writer. It’s too complicated for her simple mind.

So I told her some months ago I took a job at the local hardware store. It’s respectable, easy to grasp, something concrete — and we sell concrete on aisle 6.

I’d tell Val the same thing for the same reason, but I’d hate to see her cry when I had to admit it’s all pretend.

Mom likes the idea of me working at the hardware store. She’s always asking me about it.

And it wouldn’t do for a glory hound like me to be just a regular shmoe. No, I have to be the best (I’ve been employee of the month for six straight months).

That’s why I told her about the big award. I thought it’d be fun brag about national recognition.

She’s really proud of me.

It’s the story of the angry barber that upsets Lucy.

She’ll be 10 in two weeks — and I love telling her it’ll now take her twice as long to write her age down.

She adores Nana and hates it when I’m sarcastic.

She doesn’t want me to talk about the angry barber anymore. He’ll go down in family Christmas lore.

It was lunchtime on Christmas Day. Mom was here. The joyful morning festivities had concluded. I’d showered and was helping set the table.

I rolled my eyes and said, “Yes, Mom, I went and got a haircut on Christmas morning.”

I told her he hates his family and can’t stand being around them even on Christmas Day.

It would have been forgotten had I not mentioned at a wholly inappropriate manner — right during the Christmas dinner prayer.

Heads all bowed, I said, “Thank you, dear Lord, for the feast we’re about to enjoy. Bless those who are here at this table, bless our loved ones who are scattered around the country or with you in heaven. And, please, Lord, bring peace to this sorry world so that next year my angry barber will be able to enjoy Christmas at home instead of at his barber shop.”

Josie snorted hysterically. She thinks it was one of the funniest things I’ve ever said. She thinks this because it’s both sarcastic and sacrilegious — a Christmas prayer two-fer!

“You shouldn’t be so mean to Nana,” she says.

I may not be a nice person, but I’m proud to be raising one.

I hope she’s one day as patient with me as she wishes I were with her beloved grandmother.

Because besides her mind, she’s otherwise robust. I wonder if she’ll live to 97, as did her father.

That means I’ll be 67 when my days of caring for Mom conclude.

I fear one day her creeping dementia will turn cruel. That the woman I so love and admire for so much will become an unrecognizable ogre that’ll leave a durable scar on a memory that even now is so precious.

My fear isn’t that if I let go of the string the balloon will float away.

My fear is it won’t.