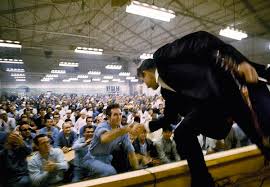 It is in hindsight one of the most surreal moments of my entire life. It was, I think, 1994.

Val and I were in Nashville to visit my brother, Eric. It was downtown at the Wild Horse Saloon on Second Avenue.

The huge place was practically empty ‘cept for me, Val, Eric, his first wife, their two young sons and Johnny Cash.

It was like 4 p.m., an hour in downtown Nashville when historically fun honkytonks like Tootsie’s Orchid Lounge are packed tight with tourists listening to great, but unheralded nobodies playing for tips.

And there we were in the Wild Horse with Johnny Cash playing just for us.

So, of course, we walked out.

I’m sure we had a more pressing engagement — like taking the kids to Chuck E. Cheese.

What the heck was Cash doing there on a Saturday afternoon performing all by himself? Did he lose a bet?

The Wild Horse Saloon was one of the first of the Disney-like show joints. Four-stories tall, it was cavernous with a big dance floor right next to the gift shop.

There were maybe six other people in the whole joint and three of them seemed to be setting tables for the eventual dinner rush.

It wasn’t unusual to see stars in Nashville, but it was highly unusual to see one of the biggest ones in history performing “I Walk The Line” for free with nobody paying any attention.

Guys on sidewalks get more respect.

It was, I think, one of the few times in my life when my instincts utterly failed me. I think it was because we were guests and Eric and his wife had plans for us.

It’s a huge regret now because we should have locked the kids in the car and stayed there and got drunk with Johnny. I’m sure within an hour he’d have let me on stage with him to duet on “A Boy Named Sue.”

We might have become chums. We could have corresponded right up to his 2003 death at 71.

I could have asked him a question that grips me every time I’m reminded of his iconic ’69 performance at San Quentin.

I’d ask how come the audience cheering to see the The Man in Black included zero black men?

Today, nearly 40 percent — 1 million out of 2.3 million — of our entire prison population is black.

I would think in ’69 the black prison population at San Quentin would have been at least, well, 1.

But in the 90-minute special I recently watched again, I didn’t see a single black prisoner either at the concert or in any of the contextual shots from outside the venue.

Where they forbidden from attending? Did they choose not to? Was Cash too country for mostly urban blacks?

Famously, Merle Haggard was there.

Darius Rucker was not.

Maybe either California blacks in the late 1960s were all law-abiding or else local law enforcers were so prophetically liberal they realized black lives matter long before it became a movement.

I saw CNN recently had a special called “United Shades of America,” starring black comic W. Kamau Bell (no relation to white anchor Wendy Bell). I didn’t see it by the promos showed him behind the bars of San Quentin.

Forty-seven years later the place is full of blacks!

I remain fascinated by race issues and how after all these years they still bedevil a proud nation created with the bedrock foundation that all men (and belatedly women) are created equal.

Maybe every once in a while.

So I’m a swirl of confused thoughts whenever I’m reminded of the great Johnny Cash and the chance encounter I blew as badly as any in my entire life.

So many questions about the famous performance in a place forever associated with unspeakable evil.

And, yes, so many questions about what he was doing in the Wild Horse Saloon performing for about a dozen indifferent jackasses who didn’t have the good sense to pay due respect to an American legend.

What he was thinking that day I can only guess.

But I’ll bet he’s the only man on earth to ever have good reason to think:

“I sure wish I were back in San Quentin!”

The decline of newspapers and the death of Mike Pigott

Was firing Wendy Bell too PC