Cleveland Rocks! And other random thoughts 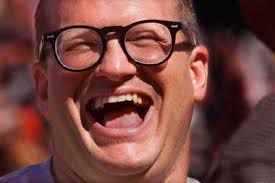 • I wonder if God and Jesus do anything special for Father’s Day. Like does Jesus  mind the barbecue so God won’t miss any of the final round action at the U.S. Open?

• “I’m happy Cleveland won the championship,” is for me an historic statement.  In my entire life, I’ve never been happy for Cleveland and Cleveland’s made it easy by never winning. The Cavaliers coming back from a 3-1 deficit is a great sports story. Cleveland hadn’t won squat in 52 years. So good for Cleveland.

• Having said that, I didn’t watch even a minute of NBA the entire year. Cleveland can win that every year and I wouldn’t care even a bit. I might feel different if it were football.

• I wonder if the Cavs victory will lead to a resurgence of the very funny Drew Carey show based on his native Cleveland. It’s rarely on and deserves to air somewhere. I love Drew — and this is sacrilege — but he’s a more entertaining “Price is Right” host than Bob Barker.

• Despite securing media credentials, I was only at Oakmont for about four hours of a Wednesday practice round. Took the family, sensitive that the heat and walking might take a toll. But attending even with golf fans can be an ordeal. Two of my buddies spent an hour driving there, an hour waiting for a shuttle bus, and an hour in slowpoke transit before getting out to trudge through ankle-deep mud. If I’d have put my girls through that there would have for me been no Father’s Day.

• Contender for 8days2Amish tweet of the month: “I may always be broke but by God, I’ll never be broken.” I was tempted to write today’s post about that profound thought, but I think people get tired of reading about how broke I am. The ever-present option fatigues me, too.

• I’m hearing from more and more people who say they really enjoy the blog. That’s great. Please share with friends, and I hope you’ll all consider buying one of my books to support me and my endeavors. And if you’ve read and enjoyed a book, particularly “The Last Baby Boomer,” please write a two- or three-line gushy Amazon review or at least tell me you enjoyed the book. Remember, you don’t have to actually have enjoyed the book. What’s important is telling me you did.

• I have friends who are suspicious of LeBron James’ motives in moving back to Cleveland. They say it’s all about building his brand. If I’m a Cleveland fan, I don’t care one bit. He did a lot for that city’s self-esteem and made a lot of people deliriously happy. Good for him.

• The USGA nearly ruined their own gala by penalizing eventual winner Dustin Johnson a stroke for an assumed and petty rules violation that never happened. I would have hated to see a championship at Oakmont sullied, but would have loved to see USGA tainted by controversy. I love golf. I love golfers, but in my experience the lords who rule the game are mostly sanctimonious pricks. A lot of pros are jerks, too.

• Val couldn’t resist pointing out the high levels of nerdiness among all the golf fans (me included). She’s cruel, but correct. The only way you can be truly cool and still be at all involved in golf is if you’re Arnold Palmer.

• Next up on the sports calendar? Tour de France beginning July 7. Many of my friends think I’m nuts for even watching, but I love it. Guaranteed, every broadcast features lovely scenery or some Frenchman or woman either streaking or flashing. Every single spectator appears to be either drunk or suicidal and there’s usually one or two really great wrecks. I remember last year one of the participants was zooming down the mountain at about 60 mph when the announcer yelled, “Cow!” A cow had wandered onto the pastoral road.

• I hear from a lot of guys who feel like I do as expressed in the below-linked, “Why Father’s Day always makes me blue.” It can be very melancholy for some of us. I think it’s cause it’s the day when, sure, we’re happy to be dads, but on that day more than any other we just really miss being sons.

• One of the reasons I’ll never be broken is because of my many good friends. My buddy Tom had a world-class cigar party at his home Saturday. There were about a dozen of us there. Just great conversation and laughs all night long. Thanks, Tom.

• I feel the same way about my family, too, of course, but they put up a big fuss if I try and light up a cigar within 2 miles of the homestead.

• This Stephen Colbert take-down of Donald Trump after the Orlando massacre was one of the funniest political satires I’ve ever seen.

• I’d watch the NBA once in a while if random cows became a surprise part of the action.

Go (to) Cleveland! A Pittsburgher reconsiders