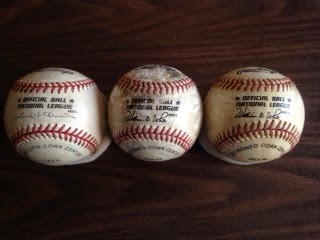 Not many of you may know it, but I’ve caught three foul balls at Pittsburgh Pirate baseball games between 1991 and 1999.

I don’t know why I don’t write about some aspect of the feat at least once a week because writing about it always makes me feel good, superior even. I know many life-long fans who’ve never snagged even one.

They’re the only object described as “foul” everyone wants.

Done with flair and in challenging circumstances, catching one is a thrill you’ll never forget.

It was like that particularly with the one I caught May 20, 1991. I recall being deathly hungover. I’d been to a buddy’s wedding the night before. I was holding in my right hand what I back then referred to as “therapy beer.”

Phillie Randy Reading sent a Bob Smiley heater screaming toward the upper deck facade right behind me and my buddies. Our necks snapped in case there was a rare rebound.

And it was coming straight for my nose.

The eyes of 32,000 fans followed the ball’s hazardous path. Balls hit that hard have been known to knock unwitting fans unconscious. I’m sure that’s what many fans feared was about to happen to me.

Their fears were unfounded.

I snagged the ball cleanly and instantly raised my arms the way boxers do after an early-round knock-out.

And I began to bask in the cheers.

The whole crowed roared. It was a great accomplishment, the kind they routinely show today on the highlight shows, made even more remarkable because I was suffering from a hangover that would have killed a horse.

There were big leaguers on the field who grinned in appreciation.

It was a great moment.

Given that the Bucs would soon embark on what was destined to become a two-decade slide of historic incompetence, I’m surprised no one offered me a contract on the spot.

I write about it today because I’m wondering about something unprecedented happening today at Baltimore’s Camden Yards. That’s where they’ll be playing the first MLB game without any fans.

And they better mean that.

If I see highlights and there are bunch of well-connected fat white guys yukking it up behind home plate, hell, I’ll set fire to a CVS.

But let’s say they have a game with no fans.

What’ll happen to all the foul balls?

Numbers vary widely, but I’ve read an average of 40 balls are fouled into the stands every MLB game.

Will they just roll around in the stands? Without fans, there ought not to be any vendors there, so they’re not in the picture.

I’ve told the story about my most heroic catch, but the one I caught August 26, 1999, was under conditions similar to what we’ll today see in Baltimore.

There were just a few hundred people at old Three Rivers Stadium that day. The ball was sliced into the section nearby and I sort of just hustled over to get it. I remember the ball had rolled up against someone’s discarded nacho plate.

There’s bound to be some great journalism coming from today’s eeriness, descriptions of a game without cheers, without heckling, without the joyful babble of voices that makes attending baseball games such a happy memory for me.

There’s just something about sitting in the sun and bantering about baseball that makes all the world’s troubles seem to drift away.

Really, what they ought to do is let just two fans in — an angry black kid and a white guy with racist leanings.

Gee, do you think we’d be able to find anybody in Baltimore today that would fit those profiles?

They should make them sit together right behind the plate and see who gets more foul balls.

I’ll bet the two would wind up buddies and there’d be some great stories about their chases.

I’m not saying it would lead to any substantial changes in the attitudes that seem to be drowning a city I’ve always enjoyed.

But it’d be nice to read at least one cheerful story out of Baltimore, a place that today is being roiled by so much foul behavior.

Related 8days2Amish tweet of the week (just because I think it’s funny): “I’m appalled by the sight of Baltimore cops beating Baltimore protesters and vice versa. The only thing that gets me through my despair is the realization that deep down they’re all Ravens fans.”

What California Chrome teaches us about race relations
Posted by Chris Rodell at 1:22 PM