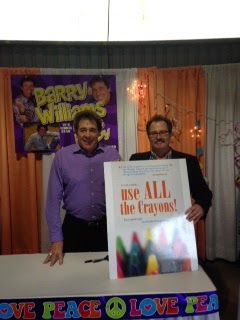 Not only did I meet Greg Brady on Sunday, I cajoled him into provide a celebrity endorsement.

“‘Use All The Crayons!’is to self-improvement humor books what the ‘Johnny Bravo!’ episode is to ‘The Brady Bunch!’ It’s edgy, funny and fills every page with warmth in the same joyful abundance that let Marcia naturally begin filling out her sweaters in Season 4!”

Of course, because Greg Brady is fictional, the endorsement has the same legal binding as if it were attributed to Bugs Bunny, that is if Bugs Bunny had a thing for the adolescent Maureen McCormick.

Barry Williams, in fact, said nothing of the sort. Had I asked him to, he might have.

He was a very good sport and from my observations said yes to every attendee request and, guaranteed, today the Facebook pages of more than 1,000 paunchy Westmoreland County baby boomers are festooned with pictures of Williams, 60, smiling with strangers.

I’d need extensive plastic surgery to smile as much as Williams did from 11 a.m. to 5 p.m. Sunday at the 20th annual Westmoreland Home Show at the county fairgrounds. I was there both days to sell books

Selling books with the word “crayon” in the title to homeowners who are there to get bargain basement deals on things like thermal windows and, well, bargain basements, is not for shrinking violets.

I think I saw, by the way, rows of shrinking violet seedlings along Gardener’s Gangway in the 4H building.

My booth was right across from the friendly folks representing a Pittsburgh home remodeling outfit. They were very aggressive without being obnoxious.

If someone said, no thanks, we don’t need new windows, one would ask about doors. If they said the doors were new, they asked about kitchen cabinets. If those were shipshape, they’d ask about bathroom tiles.

If they said the whole house was fine, they’d ask about the garage.

I just once saw them stumped. They asked a woman if she needed new windows/doors/flooring/roofing/insulation/etc.

The woman said no.

The sales rep persisted with her interrogation until the woman informed her that last year the house had burned to the ground and the insurance company had come through with an entirely new domicile with all the modern furnishings.

A look of such panicky desperation came across the rep’s face I began preparing a response if she dashed to my booth and asked if I had some gasoline and a book of matches.

That’s what I was up against.

I initially hoped to sell 20 books both days. I sold 8 on Saturday and 18 on Sunday.

But I found the time valuable and made some new friends among the authors and artists and the people who stopped to buy or just chat.

Plus, I seized the promoted opportunity to speak on the very same stage from which Barry Williams addressed maybe 120 raucous fans.

I’m not kidding. And I think they’d just stopped to rest and were too polite to leave when I began my yapping.

Their names are John and Kathy.

Really, I was pleased with how I did. I could have let the situation demoralize me. Instead, I sat on the edge of the stage and ran through a 20-minute jiffy version of my normal presentation.

Afterwards, they came to my booth and bought four books!

So Barry Williams maybe earned, let’s say $2,000 in merchandise and an appearance fee of triple that amount, but my market penetration dwarfed his.

I just need to find a way to snug the attendance gap.

Having him there did cause a happy stir.

Everyone enjoys a proximity with fame.

But I couldn’t help but wonder how the man so many people adore for their heirloom memories feels about the nostalgic redundancy that’s been baked into his entire adult life.

It’d be as if you spent your every waking moment having to re-live what happened in the 7th grade.

But the pleasant smile never left his face. If he resents what his life’s become, you’d never know it.

Maybe I’ve been wrong all these years.