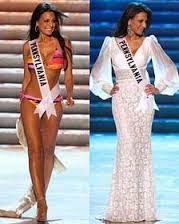 Lots of salient questions will be asked of Westmoreland County Commissioner candidate Gina Cerilli between now and the May 19 Democratic primary. Reporters and concerned citizens will ask about her stand on taxes, infrastructure, pensions, etc.

None of them have anything to do with what I want to know.

My question: “Gina, if the race gets really tight, will you begin wearing a bikini to your public appearances and how do you think that will help and/or hurt your chances?”

Cerilli, 28, is the most beautiful candidate I’ve ever seen run for any public office.

She’s also the most beautiful person who’s ever tried to sell me a new or used car.

That’s how I first became aware of her existence.

As I wrote last February, we’re in a golden age of hometown commercial babe spokeswomen (see first link below).

Advertisers eager to sell products to sports fans who watch cable baseball and hockey have shown exquisite taste in finding appealing young- to middle-aged women to hawk their wares.

My favorite, by far, was the beguiling young beauty who was eager for me to stop by at Latrobe Chevrolet and Ford to buy a new vehicle.

As eager as I was to obediently please this lovely stranger, I simply could not. Then as now, my precarious financial situation was best described by just the first of the two promotional words.

So there I was, lamenting how it saddened me to disappoint one so beautiful when my buddy, a veteran reporter at the local newspaper, piped up.

“That’s Gina Cerilli. She was Miss Pennsylvania in 2010. She’s the spokeswoman at the local water authority. They’re paying her $61,000 a year to tell people to drink water. She’s a law student at Duquesne University. I hear she’s going to run for county commissioner.”

The news thrilled me.

Not that she was running for office.

I was thrilled I could support on the cheap something she was promoting.

I told the bartender to put a splash of water in my bourbon.

But I am fascinated by her candidacy because I’m always interested in the actual prejudice some people hold against people who can’t help having been born beautiful.

Sometimes, gazing lovingly in the mirror for hours on end, I wonder if that’s what keeps holding me back.

And I’m curious as to how Cerilli deals with it.

Her candidate posters feature shots of her looking very demure. They’re tasteful. They neutralize her beauty.

I think they’re shot this way because she and her advisers know that there are many females who resent the hell out of another woman they consider too beautiful, too hot, too threatening.

And then, man, there are the dudes.

I guarantee you male support for her would spike if she posed in one of the tight dresses she wore when she was hawking Chevys.

And just imagine the national media furor if she did appear in a bikini in a naked appeal— well, nearly-naked — to shallow male voters.

Of course, all this ignores the truly important question: Is she at all qualified?

It certainly seems so. She’s excelled in some high-profile roles and never embarrassed herself.

Many will argue, not unreasonably, that at 28 she’s simply too inexperienced to run a county sprawling with nearly 370,000 people. But politicians from both parties reliably show us just how overrated being experienced can be in running anything.

So local political observers are in for an interesting few weeks.

Me, I’d like to see something happen to bring the issue to a head, to make voters confront their ugly prejudice over how they feel about people who through no fault of their own are not ugly at all.

Because the ugly truth is the only acceptable prejudice left is the one against someone who’s been born beautiful.