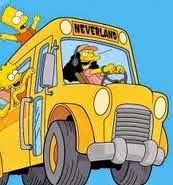 My daughter sensed my frustration over the wastefulness when I remarked how it’d be the third day that week she’d asked if I could drive her to school.

That meant it was the third day the big yellow bus drove right past our house and made nearly the same route without her — all so she could get to school 15 minutes earlier and wouldn’t have to mingle with the rest of our neighborhood morons.

That was my first thought. Our tax dollars pay to send that big bus up and back twice a day. Every time she’s not on it, we’re wasting gas, bus driver salary and benefits.

Plus, there’s the reverse. Time I spend driving her is time I could be doing something else rather than burning gas granting her frivolous teenage wishes.

Then I realized we both had it all wrong.

I shouldn’t make a special trip just to drive Josie.

I should be driving everyone!

And I mean everyone.

Due to working conditions and family stress, many parents today are unable to lavish the essential social tutoring that I, a chronically underemployed layabout, am able devote to mine.

And America’s the weaker for it.

The learning for our children should begin the instant we turn them over to the school district. We need to better maximize the time kids spend under the tutelage of the schools — and that includes bus time.

It’s why I enjoy the days I drive Josie. I consider those minutes a precious opportunity to impart wisdoms on her I’ve gleaned over the years.

It’s useless information, sure, but I consider it more of a brain barnacle: a factoid that once attached will never leave your cranium no matter how much more useful information tries to dislodge it.

It’s like that with biological facts, too. She knows that the eyeballs we’re born with will remain the exact same size for the duration of our entire lives, but that our nose and ears grow incrementally each and every day.

It’ll be good information if she ever chooses to follow in her old man’s footsteps and waste her life slouching from atop a cushioned bar stool.

Can your children can name all five Traveling Wilburys — and not just by their actual rock star names (George Harrison, Jeff Lynne, Roy Orbison, Tom Petty and Bob Dylan), but also by their Wilbury names (Nelson, Otis, Lefty Charlie T Jr., and Lucky)? Mine can.

They can casually cite that, yes, although Marlon Brando is considered one of America’s finest actors, he was terrible at memorizing lines and once asked a director if he could have his lines written on the butts of his co-stars (his request was denied).

I try to avoid politics. I want Josie to be free to make up her own mind in that regard — unless, of course, she opts to become a Tea Party Conservative, in which case I’ll withdraw all support and fatherly affection until she in tears apologizes her intellectually bankrupt audacity.

These are the kind of wisdoms I’ll impart on all the local kids if their parents and the school district let me drive them all to school. Much of what I say will, guaranteed, stay with them longer than what they hear in more structured classroom environments.

I’ll tell them all that cheerfulness is a choice, to never leave any baseball game until the final out is called and to never gulp even cheap wine.

Oh, it’ll be a fulfilling day right off the bat.

And educating the children will just be for starters.

Once I drop the kiddos off, I’ll turn right around and starting picking up all the parents.