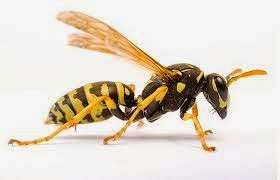 In order to better represent the painful threat they pose, your average wasp should be the size of winged Volkswagens.

And they should have sirens.

That way they wouldn’t be able to surprise me by flying down the back of my shirt to sting the bejesus out of me. Three days later, it still hurts like hell.

I had no idea my back contained so much bejesus.

Just typing that line has me wondering if there is a Bee Jesus. I know there are queen bees and that they help pollinate the earth. But are there bee deities?

What the hell wasps do besides sting me on a near-yearly basis, I do not know.

This one flew down the back of my shirt after I’d picked the girls up from school. I was carrying a gallon of milk, strolling through the basement and singing “Rainbow Connection” by The Muppets.

Could I have been more wholesomely innocent?

Then it was like a military grade sniper bullet exploded into my left shoulder down near the armpit.

In an instant, I went from singing, “Why are there so many songs about rainbows?” to shouting military grade profanities and ripping off my shirt like David Banner does when Hulk starts taking over.

The girls were alarmed. They’d never heard me explode with profanity like that before and didn’t know whether my furious disrobing was going to stop with my shirt or proceed to the pants.

I threw the shirt on the floor. There it was. I couldn’t tell whether it was a boy or girl wasp — it must be confusing even at wasp singles bars — but I swear this one was giving me the finger.

I squashed the nasty little bastard.

First Aid was applied. Josie scraped the wound with a credit card, which is how they advise you remove the venomous stinger. No word yet on whether Discover fees will result. I took a couple of Benadryl to ease the pain and applied ice to reduce the swelling.

Then, remembering sitcom home remedies, I climbed in the tub and spent the next two hours bathing in tomato juice.

My ordeal was so bad it even drew sweet sympathy from my wife. She honestly felt bad for me.

I know this because she couldn’t figure out a way to blame me for getting myself stung.

How the hell wasps ever made it off Noah’s arc without getting swatted with a rolled up newspaper is a mystery.

Wikipedia says wasps are essential in limiting the spread of garden pests, upon which they prey.

The answer seems to lack authority. I have many flaws, sure, but I’ve never been accused of being a garden pest.

This is the earliest I’ve ever been stung, and I usually get dinged about once a year. It’s alarming because this might means I’m due for seven or eight more stings before fall frosts kill off the threat.

And I hate the thought of one of my darlings getting stung.

They’re not garden pests either.

I wonder if the early wasp activity is a result of climate change, something I’ve long feared. We don’t know what’s happening.

For instance, what if one unforeseen change is that lightning bugs, beloved for playfully illuminating soulful summer nights, begin to shoot actual lightning from their buggy little butts?

It’ll be the end of cradling one in cupped hands and peeking an exposed eyeball in through the thumb slot.

I wish we could genetically tinker with wasps so they’d know to sting only the truly evil, and “truly evil” includes people who send ALL CAPS e-mails, drive too long in the passing lane, and use social media to post anti-social political rants.

And they’d certainly target New York Ranger center Derick Brassard, who on Friday evening against the Pittsburgh Penguins will surely be a Madison Square Garden pest.

Where it all ends I do not know.

I just pray to the great Bee Jesus I won’t soon again be stung.