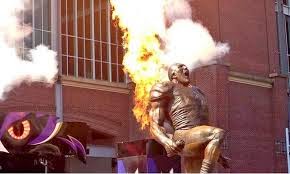 (804 words)
Lots of outraged people responded to the release of the brutal Ray Rice video — let’s charge him with attempted homicide — by issuing angry tweets.

Me, I sold two Pittsburgh Steeler season tickets/seat licenses that have been mine for 25 years and in my family since 1950.

Of course, one didn’t have anything to do with the other. It was purely coincidence.

I stopped being a fan of the NFL about six years ago. I became fed up the arrogance, hypocrisy and greed that have become NFL hallmarks.

I guess it’s ironic of me to accuse the NFL of greed when that’s the real reason I’m selling my seat licenses. I paid $200 a piece for two in 1999 and can likely get about $7,000 for them today.

The price, I assure you, will never be higher. Interest in the NFL has no where to go but down. Yes, a mighty comeuppance, one I’ve been predicting for years, is finally here.

This I can tell because the prevailing attitude among the talking meatheads on ESPN yesterday wasn’t justice. No, it was something rarely seen among men who for most of their lives have had their 270-pound asses kissed.

It was fear. Something that had nurtured their cushy lives is going away

Fear because if the mighty NFL slipped in covering up the Ray Rice assault, what else might slip through.

I laughed out loud when I heard former New York Jets coach Herm Edwards say, well, this is terrible, but now that the NFL understands it has a domestic violence problem it will take the lead in bringing this issue to the nation’s attention.

He’s got it perfectly backwards.

I contend the nation has a domestic violence issue because of the culture the NFL’s promoted for the past 15 years.

From Nate Silver’s statistical blog: The NFL rate of domestic violence is “extremely high” when compared to other occupations and “accounts for 48 percent of arrests for violent crimes compared to 21 percent nationally.”

And given that there is zero poverty — a contributing stress factor to marital conflict — “the domestic violence rate of NFL players is downright extraordinary.”

Instead of sportsmanship and compassion, we have taunting and a stomach-turning ruthlessness.

It promotes violence to the point that it takes reprehensible steps to conceal the test results that reveal that violence is leading to concussive brain damage among its employees who react to the symptoms with untreated despair and more violence.

Kansas City’s Jovan Belcher in 2012 killed the mother of his daughter and then himself. Other prominent suicides from recent years include Junior Seau and Dave Duerson, and the NFL is the first sport to have had a serial killer — New England Patriot Aaron Hernandez — on its payroll.

What gets me is how the NFL and the people who promote it on the network level, hold up football as a paragon of American virtue.

You can see it in the fraudulent splashes of pink on the jerseys during Breast Cancer Awareness Month and in the SportsCenter puff pieces that convey just how much good NFL players and teams do for communities, never mentioning how much good communities do for for-profit NFL owners in their tax-payer subsidized coliseums.

Of course, that’s all just conjecture on my part.

You’ll have to go to Baltimore to see a concrete example of what I’m speaking.

It’s in Baltimore you’ll find a monument to all that’s wrong with the NFL.

It’s a statue of Ray Lewis, who yesterday called himself a mentor to former teammate Ray Rice, an awkward roll for a man whose own mother was a victim of horrific domestic violence.

Lewis is the Raven who retired a Super Bowl champion in 2012, a dozen years after being charged in the double homicide of two men outside an Atlanta nightclub. He eventually agreed to a plea deal for obstruction of justice and was given a year’s probation.

The white suit he was wearing during the stabbing was never found, and his co-defendants charged in the killing — his friends — were acquitted. No other suspects have ever been charged.

In 2004, Lewis reached undisclosed financial settlements with the families of the murdered men.

Despite the payoff, both families say it sickens them to see Lewis idolized.

Maybe we could all get together and drizzle blood over a white suit and dress it on the Lewis statue some early morning when no one’s looking.

The story of Lewis, one which now evidently includes redemption, is similar to what you find in the Bible, a book Lewis frequently sites as an inspiration.

It’s the kind of story with which I’ve learned to live.

See, I can handle the humanity.

It’s the hypocrisy I despise.

NFL’s a bore: here are 5 ways to save it

Replacement refs? NFL must be joking

NFL and throwback jerseys
Posted by Chris Rodell at 11:18 AM

There are too few "Hy's" in hypocrisy to describe the latest manifestation of the contemporary NFL culture---you have got it quite correct.

Your ballsy statement that the NFL may lie more as cause-then effect--to the ugly scourge of domestic violence is also more right than wrong.

Like you I constantly criticize this sports oligarchy and use it as an illustration of a great American business, brand and institution that is going to decline mightily in the next ten years.

Amid its tin-ear on relevant social matters the league has gone all in in promoting "fantasy" football thereby wrongly diluting its own product with the insinuation that the ultimate team game can somehow be reduced to a series of great statistical performances at certain positions.

As is common with anything "great" that falls, too much of the NFL carnage is self-inflicted--and its comeuppance could not come soon enough. Who thought we'd pine for the day when the NFL was merely Sunday and Monday night entertainment and a great way to teach the point-spread to kids!

Bingo, John. The decline is imminent. Something we used to live for has driven us away. I hate the greed and arrogance.

Can you believe Goodell may not survive this? It's actually looking that way to me.

It might make a soccer fan out of me!

What'll we do without baseball?