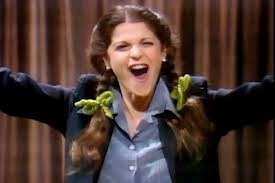 Too many people gaze into the morning mirror and catalog too many perceived imperfections. They see the turkey neck, eyelids that droop or that heroic schnoz momentous enough to be detected and tracked by Google Earth.

But there’s no surgery for my most glaring facial flaw.

My face conveys no mirth.

It has no playfulness. No subsurface joy that looks eager to emerge. My expression does nothing to tickle yours.

I’m am not alone.

Gaze today into the faces of nearly everyone you pass at work or on some busy sidewalk. Our faces have become masks. No one makes eye contact. No one has the giddy kernels of a budding smile tugging at their lips.

We’re all shadows with shadows.

Indeed, Earth is in the sad midst of a mirth dearth

I came to this realization when watching the recent “SNL 40” special a few months ago.

Of all the very funny people on that happy show, I saw two faces that really stood out as most imbuing the joyful mirth we’re all missing.

They were the faces Gilda Radner and Dana Carvey. Both have faces of such utter mirth and joy it’s impossible to imagine either of them being serious or depressed.

It was especially that way with Radner, whose mirthful face made Santa look like a sourpuss.

Maybe my rapturous feelings for Radner are colored by poignant recollection of her 1989 book, “It’s Always Something.” Val and I remember thoroughly enjoying an audio version of it during a long vacation drive. I remember Radner sharing about how much fun life can be and how you can wring merry mirth out of even the most difficult situations.

And she wrote about it when she was dying of ovarian cancer at age 42!

She was married to Gene Wilder at the time. Can you imagine if life were at all fair and she would have lived and these two magnificent humorists had conceived a child?

I have to believe the child would have been a spiky-haired cartoon.

Here’s a suggestion if you’re having a bad day: Try to imagine the faces Gilda would make in the throes of childbirth. It’s hilarious.

Carvey, too, for that matter. In fact, Dana Carvey pregnant would be one of the funniest things in history.

It could still happen. My fingers are crossed.

What disappoints me is I believe I have an enormous reservoir of inner mirth practically squiring out my ears. I’m always thinking light-hearted thoughts about things like unicorns, rainbows and stupid fart jokes.

It’s just you’d never know it from looking at me. I’ve been told my face looks like it’s always busy calculating how to reset the Doomsday Clock another minute or two nearer our mutually assured mass destruction.

Mine is the kind of stoic face that looks like it belongs in a police line-up which, incidentally, is a bucket-list ambition of mine.

Beneath all that, there is tremendous mirth. I revel in life. You’d just never know it by looking at me.

Maybe you’re that way, too.

Maybe the problem isn’t the size of our noses, our receding hairlines or all our chipped and crooked teeth.

Maybe the problem is all in our eyes.

We are unable to envision what’s buried beneath all the scar tissue.

Taking my BRF (Bitchy Resting Face) out for a stroll

Honked off over Egyptian nose jobs

Why do Olympic gymnasts rarely smile?