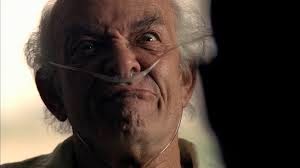 I’ve spent a good deal of the last two months contemplating how I am the same age as Walter White was when he — spoiler alert! — sort of shot himself to death in a remote New Mexican meth lab.

By the time he was 52, the high school chemistry teacher had built a lucrative meth empire, robbed a train, murdered the grumpily resilient Mike Ermantraut, beat cancer, outwitted Lidia, been the subject of a nationwide manhunt and cunningly slew more than a dozen neo-Nazi war lords in their cozy desert clubhouse.

My greatest achievement at 52 is I’ve watched every episode of “Breaking Bad” at least twice.

That and I’ve never dunked my phone in a toilet bowl.

But my “Breaking Bad” bona fides make me a man of consequence.

I know this because these days anytime you get into a conversation with someone the talk eventually turns to TV and we today are all judged by what we watch.

My wife and I have ended important relationships with once-vital associates because they weren't conversant on “Breaking Bad” or didn’t get the reference when she mentioned some obvious “Seinfeld” hilarity.

“I know, I know,” she said. “She was once a crucial part of our lives, but how am I supposed to relate to a woman who doesn’t get it when I say, ‘No soup for you!’ when she asks for another bowl of mulligatawny?”

I understood what she was saying and, true, the woman’s brash ignorance was inexcusable.

But the woman is my mother and must remain a part of our lives, even though watching TV with anyone who mindlessly flips the channel every 2.5 seconds is infuriating.

I’m starting to miss the days when TV was mostly stupid.

I liked it when it took me just 30 minute to devour about 23 minutes of juvenile entertainment, when I didn’t need to week-after-week follow so many complicated characters that left me clinging to so many proverbial cliff.

Like knowing Mr. Roper was going to at the end of “Three’s Company” still naively think Jack Tripper was a homosexual. And that the exact same plotline was — spoiler alert! — going to be repeated every single week!

Watching TV’s become too much like a test. We need to divine all the plot twists of “The Americans,” the intrigue of “House of Cards,” and predict when Michonne will resume wielding her Samurai sword to fend off the encroaching zombie horde.

I’ve binge watched so much I feel like purging.

I think it’s because the bar is now set so high.

“Breaking Bad,” truly, is the best show ever. The cinematography was vivid, the dialogue crackled and the stories mesmerized.

Most everything to come in its wake has been wanting, even its much ballyhooed protege, “Better Call Saul,” which often lags.

If they’re too personally repellent for me to want to lunch with them, why would I want to watch them on-screen boink some beautiful House intern to whom they’re not even married?

I think that’s why “Breaking Bad” was such a success. Every major character had appealing attributes about him or her.

Everyone but Tucco’s loathsome Uncle Hector (above).

I mention this now because a show I came to belatedly begins its final run on Sunday. It’s “Mad Men,” and its return conflicts with the only program I enjoy even more than “Breaking Bad.”

I started watching “Mad Men” on the early Sunday morning re-runs. Now, I’m hooked. It’s very well-done, and the history nut in me loves how they weave the major events of the tumultuous ‘60s into every story.

I’m looking forward to it so much I’ll even skip the ’15 debut of what is probably my favorite show of all time.

What is this most compelling show with every single human drama that still provides a satisfying conclusion each episode.

“Breaking Bad” vs. “Sopranos:” Who wins?