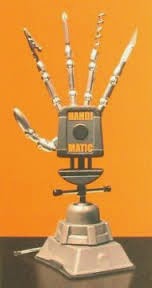 This was from April ’12. It pops up every once in a while. That pleases me. As a writer, these little stories out of thin air are some of my favorites. They’re exactly what I think a good blog should be all about. Little surprises out of nothing.

We were sitting there in a packed assembly hall awaiting the beginning of the 5th and 6th grade music extravaganza. It’s where parents and loved ones revel in a sometimes off-key performance and pretend not to notice any perceived flaws.

In my lap was our 5 year old who from up close was examining parts of me like she was determined to catalogue every flaw.

She pushed facial moles like they were elevator buttons, ran her fingers along proud old hockey scars, and parted hairs in my bald spots the way ambassador Robert Thorn did in “The Omen” when he was trying to divine if Damien’s skull bore the mark of the beast.

She was curious about the big callous on the upper palm beneath my ring finger. As it often does, it had a jagged edge to it I rarely notice.

She wanted to know about the tough skin anomaly.

“It’s a can opener,” I said. “When I’m hungry I use it to open a can of oyster stew. It’s always very satisfying.”

Looking back, I should have said it was very “handy.”

I don’t know at what point in the show -- which was perfectly entertaining and without evident flaws -- but I remember thinking how I wished I had a can of oyster stew in my coat pocket.

I sat there thinking about how under-achieving our hands are. Shouldn’t they be at least as functional as our phones?

Really, our hands need to evolve to suit modern demands.

I understand the romantic pleasures of walking hand-in-hand along the beach, but why can’t one hand be a sort of Swiss Army Hand? It could have a can opener, nail file, knife, scissors, screwdriver, and a wine corkscrew.

Those are the hallmarks of the iconic Swiss Army Knife, a device nearly everyone in the world’s heard of. Funny, the equivalent number of people probably can’t name a single military victory or hero who’s served in the Swiss Army.

Maybe the Swiss would have been more feared had they put their energies into inventing a Swiss Army Bazooka.

Still, human trajectory seems to indicate our hands ought to become more functional. For instance, how come we don’t have a fork for a finger?

People talk about ours becoming a paperless, cashless and keyless society. Smartphone innovations are slowly eroding the need for that jingly sort of pocket miscellany.

My sense is the next evolutionary step is we become a pocketless society. We won’t need pockets because everything we need will be accessible through our hands.

We should draw the line there, too, as no one wants a pantsless society.

But clearly, the next step in smart phone technology needs to be the elimination of the phone itself.

I’ve seen studies that say one out of every five people admit dropping their pricey smart phone in the toilet. This happens to careless men, in particular. Urinal time is the perfect opportunity to check the scores and social media.

I’m guessing some men are so startled to learn that Suzie changed her Facebook status to single that -- kerplunk! -- they drop the phone into a place where the old Tidy Bowl Man will the one most likely to answer the “Can you hear me now?” question.

That kind of thing practically never happens with our hands.

I predict we will soon be using our hands to do many of the things for which we today use our phones -- and more.

Besides the finger fork, we might insert a telescoping back scratcher or maybe a golf ball retriever for when the approach shot gets dunked in the drink.

Some attachments could help ease road rage. An angry motorist could angrily react and instead of the finger, one of those novelty magician carnations might pop up, a mollifying gesture.

One finger could be a laser pointer if a power point meeting was planned. If the meeting was fruitful, the presenting team could set off pre-loaded bottle rockets from finger launchers.

Anyone else think this is a good idea?

Let’s see a show of hands.

And by show of hands, I’m talking a real show.