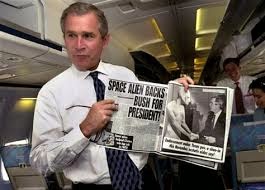 My first thought when I heard the newscaster say a baby had been born without a nose was that the Weekly World News had commandeered the airwaves.

Oh, how I wish that were true. The world right now could use more of the kind of heyday news the WWN published.

She was the black-’n’-white sister publication of the National Enquirer back when I was running around with those swashbucklers. The rogue organizations were housed in the same Lantana, Florida, building, separated by just a seven-foot partition.

And when the day was done, reporters and editors from both publications would converge on the same small bar and swap stories of what that day’s news gathering had reaped.

It was there I learned what to me is the absolute distillation of pure journalism. It was from a WWN editor who told me:

“If a woman calls and says her toaster is talking to her, I don’t refer her to mental health experts. I tell her to put the toaster on the phone.”

It was because of that sort of open-mindedness that the WWN became a bastion of lively news headlines like:

• “Cannibal food critic rates people he’s eaten based on their nationalities! (Mexicans and Chinese were “too spicy,” but Americans were highly rated for taste and texture.

• “Cruel surgeon re-attaches Siamese twins after they fail to pay their bill!”

• “Astronomer furious after NASA bosses rebuke him for ‘endlessly staring into space.’”

They broke the news that Dick Cheney was a robot; that Elvis Presley had died — in 1994; and that after stealing a race car that Big Foot would henceforth be known as “BigLEADfoot.”

But I most loved the often poignant stories of children born with unusual deformities.

It had pictures of the Dad carrying the boy around in a bucket, the child’s smiling face floating up there on the top.

“Just because he ain’t got no bones don’t mean he’s not our son and that we won’t love him,” said Pops, who admitted the condition made hugging hard.

So you can see why I thought, “Baby born without nose!” was a story straight out of the old WWN.

Turns out it was not.

It’s straight out of Alabama.

“Eli’s doing great,” said mother, Brandi McGlathery. “He’s just like every other baby. He just doesn’t have a nose. Troy (the baby’s father) says all the time, ‘I think it gives him character.’ We think Eli is perfect the way he is.”

The condition is known as congenital arhinia. There are only 41 known cases in the entire world.

The pair said if the boy wants a nose, they’ll get him one, finances permitting.

Like lots of individuals, I’m a full organ donor. Heart, liver, lungs, eyes — come and get it.

Now I’m wondering if I could donate Eli my big ol’ booger barn. It would look really funny on him now, likely to cover his entire face. And the mustache would have to be thrown in as part of the deal. The nose and the mustache have been inseparable since 1986.

If the kid’s savvy, he’ll use his parents’ gracious understanding as a bargaining chip.

And as the son of an optician, I wonder how he’ll ever get to wear sunglasses.

Every single pair of glasses requires at least a little stabilizing nose bone or the glasses will slide right off the face.

I guess he could use a right and a left monocle, but that would likely distort his orbital muscles into a permanent squint.

But the kid’s going to need sunglasses.

Because you can, indeed, be cool and not need a nose. But you can’t be cool without a great pair of shades.

Of course, that’s just me, a guy with a real nose for news who’s always looking on the bright side of things.

What happened when I spent 72 hours handcuffed to my honey

Newt, the alien & me