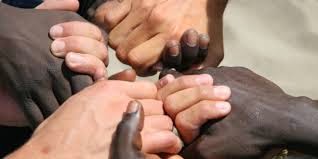 And I believe it is a war because I keep overhearing white people say that the only solution is to either jail or kill all the black people.

I like to think they mean the ones who are burning and looting, but I’m too familiar with how hate-filled minds work to extend the benefit of the doubt.

We live in an age when most brains are so full of self-confirmed media pseudo- facts there is no longer any room left for thoughtful subtlety.

Me, I don’t believe anyone deserves to be jailed or shot based merely on his or her race. I instead believe every one from every race deserves at least a chance.

This is a problem that’ll never be solved if it’s viewed as a mere law enforcement issue. The cops are under siege, too, but just for different reasons.

To be solved, our racial injustices must first be acknowledged.

That’s where we’re at right now.

Despite the media hysteria — one that has me nostalgic for news of Ebola outbreaks — fair-minded people are beginning to understand you can’t continue to have uniformed white men with guns, backed by white DA’s, saying killing unarmed young blacks is okay.

I can’t begin to imagine how black parents repeatedly explain the redundant news to black children that, yes, in America in 2014 this is just the way it is.

No one with any sense of justice, irregardless of race, would tolerate their youth being jailed and killed with impunity.

If it happens often enough, you can forget about fearing local riots.

Your biggest concern will be revolution.

This isn’t a problem we can kill our way out of. The jails are already full and they’re running out of room in the cemeteries.

It’s not a racial issue. It all comes down to simple fairness.

No one in America deserves to be persecuted based merely on how they look. It’s the same with who they love or who they do or do not worship.

See, so many people are spending so much time hyperventilating over the last shooting when, as tragic as that is, it’s really no longer the point.

What should concern us all is not the last shooting.

It’s the next one.

And because I wouldn’t want the blessings of the season to get lost amidst all this unseemly tumult, let me take this opportunity to wish each and every one of you, er, . . .


Too much George Zimmerman commentary . . . here’s mine!
Posted by Chris Rodell at 10:29 AM

Good stuff Chris!
I bet Santa Knows what the liberal humanists want for the Holidays!
Apparently Tear gas or reactionary polarizing media coverage are popular gifts ideas this season.
Two things I found odd that have not been brought up.
Professional wrestling!
One officer describes the soon to be victim as a famous wrestler, the other appears to be trying to take down the soon to be victim with a sleeper hold, almost being pushed through a store window.
Have the youth of today been indoctrinated into an overly simplistic adversarial competitive world view, good and bad,black and white? Us and them?
Both incidents involved Law enforcement because of Tobacco.
War on Drugs? or Tax revenue over the black market?
Ho Ho Ho peace on earth, good will to Men, women and everything else

Ha! Great to hear from you, Bryan. Particularly on a post I'd be eager for you to read. Wish you and I could smoke the peace pipe this holiday season -- or what ever you're smoking/drinking these days.