Blog year in review: 36 "best" to share with friends 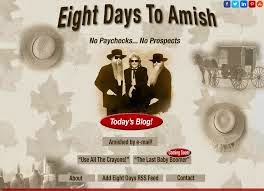 This is the time of year when it’s customary for traditional media outlets to publish Top 10 best/worst of lists.

The official “Eight Days To Amish” 2014 list touts 36 of the 230 essays I’ve posted throughout the year.

Because 10 is way too few and 230 would have taken way too long. Really, I think they’re all worthy.

I think eventually I’ll look back on 2014 as the year I began to shed my default self-deprecation.

I’m being forced to. I am becoming overwhelmed by the diverse number of people who tell me just how much they love “Eight DaysTo Amish.” I think it shows in the writing. It’s becoming more assertive, a bit cocky, even. It tackles even difficult topics with relish and gusto. Even when it’s embarrassing to its author, the blog insists on being forever genuine.

Yes, the humble little blog is losing its humility.

I now know that a lot of people feel the same way about the blog as they do about “Use All The Crayons!” They love it, look forward to it four- to five-times a week and are bummed when I miss even a day.

The reaction warms my heart.

So I thought if you’re one of those people I’d give you a year-end overview you can share with friends who might enjoy it. It has a really healthy sampling of what I think works here on the blog.

Thank you for all your encouragement and cheer. It means the world to me.

I’m optimistic interesting things are in store for 2015.

Bark Up/Bark down: A neighbor’s dog left out in the cold, January 7 — “I instinctively knew if I was shot dead, Wayne LaPierre would in 48 hours be holding a press conference saying I’d had it coming.”

Flakey thoughts on Atlanta snow traffic nightmare, January 31 — “I thought, ‘Gee, how come it took us four whole years to whip their Rebel butts in the Civil War?’ You’d think a people paralyzed by two inches of snow would flee crying from a battlefield if you stood up and yelled, ‘Boo!’”

Everyone hates Patrice King Brown; here’s why,  February 19 — “And UPMC runs ad nauseam commercials featuring the once-beloved Patrice King Brown. I’m unsure of the precise Latin meaning of ad nauseam, but if it means ‘ads that make people nauseous,’ I won’t be surprised.”

Wouldn’t it be great if Flight 370 were found with everyone alive? March 17 — “I’ll never forget his answer. He said, ‘I thought if I ever make it out of this hole alive I’m going to spend the rest of my life getting stoned immaculate.’ He’d been back above ground for just 24 hours and he was well on his merry way.”

Obama hater spoils my breakfast then my windshield, May 23 — “As he was leaving, I said, ‘Well, Happy Easter.’ He said. ‘That’s a pagan holiday. It’s Resurrection Day.’ It’s in our interests to accommodate everyone, but I hope he never comes back.”

RIP Maya Angelou & world’s greatest poem, May 30 — “I tend to think of poets as being lyricists too lazy to learn guitar.”

Sing me a song, you’re the bartender! June 30 — “I don’t tell her that Dave doesn’t want wild men in his bar and that, really, there are usually about four or five guys who eat lunch there who have bigger tits than she does and nobody really cares.”

Cheers! My bartending stint is over, July 11 — “Even though it’d been 27 years since I’d lasted tended bar, I said yes right away because saying no to Dave in that situation would have been like Rudolph saying no to Santa.”

Drawing warmth & cheer from the pain & suffering of idiots, July 12 — “The explosion caused an impromptu Three Stooges skit to break out right there next to the bar dumpster. They each put their hands to their faces and began bouncing into one another. The Bronco engine was fully engulfed. And it was all hilarious.”

A back ’n’ forth on palindromes, July 15 — “I’ve said previously that for the sake of clarity, “palindrome” should be spelled palindromemordnilap.”

On chicken fingers, chicken breasts & chicken nipples, July 17 — “I always make a point anytime we’re out at some family restaurant to ask the waitress if she has chicken fingers. As the answer is always yes, I say, ‘Oh, you’re being too hard on yourself.  Your fingers are ugly, but they still appear human!’”

Pittsburgh mom gambles on locking kid in car, August 8 — “Yes, Valerie E. Snyder made a terrible mistake. She should never have locked her son in the car. She should have locked him in the trunk where no one would have seen him.”

Many vexing world problems: at least chips are great!, August 18 — “It’s a pity we can’t be as appreciative of the diversity of races and religious beliefs of people as we are about the chips we consume.”

“The Simpsons” will live forever; Sam Simon won’t, August 21 — “But I’ll instead divert and tell you about what might be my favorite Simpson’s story. It’s the story of Sam Simon.”

Stop buying Rolling Rock! It’s made in New Jersey! August 29 — “The brewery went idle and 70 of my buddies were out of work. Some in Latrobe turned to prayer. Me, I turned to Yuengling, a fine Pennsylvania beer brewed in Pottsville.”

A celebration of food & death row last meals, September 12 — “And while I have no fear of death I absolutely dread the idea I might either die hungry or with a belly full of pedestrian crap.”

Why do so many things suck so bad? September 24 — “Right then all I had was a growing desire to complete my transaction and vacate the store before any of my neighbors saw I was a grown man who likes to lick lollipops.”

I cry over commercials (farewell, Cap’n Jeter!), September 26 — “I had nothing to be ashamed of. I mean, what grown man doesn’t cry at Gatorade commercials?”

My advice to tomorrow’s critics, October 2 — “When I think of good critics, I think of words that involve light and vision. They’re insightful, enlightening, illuminating. They take something I’ve yet to see or understand and bestow it with clarity.”

See Jennifer Lawrence naked! (Just pay before ya peek!) Oct. 13 — “I made that mistake once and, I swear, it was the last time I’ll ever click on links to sites promising sexy Betty White shots.”

Why I always give trusting strangers wrong directions, October 15 — “Because I’d never heard of a Beechview Avenue, I decided to send her down a long country road. It can be very unsettling being lost in an unfamiliar town. I thought on this beautiful fall day it would be far better for her if she could at least be lost someplace more scenic.”

Results of my first physical in 18 years, November 7 — “‘You’re a miracle,’ she said. ‘The doctor’s going to get a kick out of meeting you.’ All this giddy stir and I’d yet to even remove my pants!”

I buy books, November 14 — “As a father of daughters, I’ve probably seen ‘Frozen’ hundreds of times, once 100 consecutive times on the same school snow day.”

It was a very Zombie Thanksgiving, December 1 — “It won’t be truly authentic to me until you hear one of the cast utter the obvious line, ‘Dammit. I just stepped in a huge pile of zombie poop!’”

The Pond is for sale! Anybody wanna buy a bar? December 19 — “I’m sure years from now they’ll remember Friday nights we’d eat pizza in the Pond dining room and then walk the mile to the stadium to watch the high school football games. Ain’t that America?”

At Christmas, wondering about the Teenage Jesus, December 24 — “Did Jesus ever get in trouble for acting like a real know-it-all in Sunday school?”
Posted by Chris Rodell at 1:29 PM