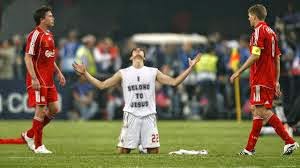 I think the World Cup would be more compelling if the teams were comprised of those who share extreme religious beliefs.

So instead of games like, say, Cameroon v. Brazil or Croatia v. Mexico, viewers would be treated to matches between Christians and Hindus and the Sikhs against the Fightin’ Scientologists.

I think athletic competitions between bitter enemies helps humanize those we reflexively hate for appearing or acting differently. And sovereign nations have many non-lethal ways to blow off competitive steam. Besides World Cup soccer, we have the Olympics; golf has the Ryder Cup, etc.

But with religion, the only way we have to settle the old my-God-is-better-than-your-God argument is on the battlefield.

And that is one busy battlefield. Throughout history, anyone with the temerity to worship differently is often forced to either change their beliefs or die for the sake of pilgrim purity.

That’s what’s so confusing about what’s happening in Iraq right now and for, I guess, the past 1,500 or so years.

The Shiites and Sunnis hate each other for reasons that remain elusive to my feeble comprehension.

I’ve read and forgotten many times over the source of the conflict, but if I were an international peacemaker, I’d say, “Look, you’re all Muslims. You all read the same Koran and worship the same Allah. And if we ever sat all the major religions together alphabetically, you’d all be in the same homeroom.

“Can’t you all just try and get along?”

It seems to me a religious World Cup might do the trick. Because they’d all be rooting for the same team — and for sporting purposes I’m not talking about Team Mohammed.

I thought about suggesting the teams be broken down along less ecumenical lines; that means splintering the major faiths into sects (like Sunnis and Shiites), but a broader approach might be more unifying. This would save having the Protestants going against the Catholics, which would be preposterous, at least to those too young or ignorant to remember what happened in Ireland from about 1967 through 1998.

Some might argue population would be a determining factor in which countries succeed. Not necessarily. Tiny Uruguay won in 1950. That’d be like the Druids winning the Religious World Cup.

The organized religions would, I’m sure, be avid supporters of the idea because they’d know what a promotional bonanza they’d reap if their team won, especially since every single participant will boldly proclaim that they had God/Bismillah/Buddha/Zeus/etc. on their side.

I think, too, it would be informative.

Imagine a match that would include members of the Falun Gong gang from China.

I’ve heard that one tenet of Falun Gong is the belief among some adherents that they are capable of achieving human levitation. That sounds cool until you realize the typical soccer ball obeys the laws of gravity and spends most of the time on the ground, several feet below the foot of your floating F.G. worshipper.

So simple levitation might be a disadvantage in soccer.

Imagine the interest if Falun Gong played a team comprised of members of the Wicca religion. They can fly, can’t they? Of course, they’d need a ruling to be allowed to take brooms on the pitch.

But my, what a fun game that would be to watch. It’d be like ESPN broadcasting one of those Quidditch matches from the Harry Potter books.

You’d have to think organizers would take great pains to ensure the Atheists didn’t play the Satan worshippers in one of the later rounds, a ratings draw that would be Super Bowl equivalent to Cincinnati playing Atlanta.

Of course, it’d be great for world religions if during that game a lightning storm struck the non-believers on the pitch and in the stands.

The best finale, of course, would be the Jews vs. the Muslims.

I always hate it when mayors of competing cities make those lame bets over things like bowls of chowder or Primanti sandwiches.

Imagine the stakes of a futbol match between the Jews and the Muslims?

Sorry, but I won’t be rooting for the hometeam Christians. Many Christians are way too smug for my tastes and I can’t root for a team that will likely wind up being coached by Pat Robertson.

No, I’ll be rooting for the one religion that’s all about true peace and spirituality, the only religious team that’ll enter the tournament with what no one can deny will be real buzz.