Why soccer/metrics won't ever measure up in USA 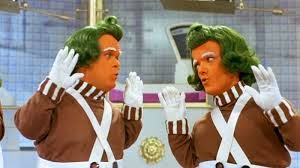 I thought it was Seal Team 6 and they’d conquered all of Ghana.

It’s once again time for that quadrennial event that I’ve for the last 40 years been hearing was going to make a soccer lunatic out of me.

It’s once again time for the World Cup.

I feel about soccer the same way I’ve always felt about the metric system.

People have always told me I’d grow to love it, that it was the wave of the future and that soon America would join the rest of the world in embracing it.

“I knew the metric system in America was doomed about 20 years ago when I saw a sign on the Pennsylvania Turnpike that read, ‘Metric System Measurements In Place — Next 10 Miles.’”

That’s what my friend Dave once said when I asked him if he ever thought we’d live to see metric go mainstream.

It is the two-liter bottle of Coke.

And why that one caught on where all the rest have failed might have more to do with carbonation than convenience.

Has your spouse ever asked you to bring home a two-liter jug of milk? Of course not. That’s because there is no such thing. Milk is mostly sold by the gallon or the half-gallon.

But no one’s ever sold Coke by the gallon. I think that’s because the public and the soda titans labor under the quaint notion a gallon of soda might go flat if left in the fridge too long, something that won’t happen with pasteurized milk.

I believe, given our unquenchable thirsts for these carbonated poisons, these measurements might soon change. Americans of all ages love to guzzle pop.

You could soak your feet in a typical Big Gulp from down at the local convenience mart. The two-liter size could be soon obsolete.

Mark my words: in 20 years soda will in some nutrition-free pockets of America replace milk as the cereal supplement.

This is important because unlike soccer, Americans instinctively care about soda.

It’s now safe to judge the great American soccer experiment a failure. We’ve now had four generations of Americans weaned on soccer. Every boy and every girl from ages 4 to 50 has spent at least a few recreational hours kicking a soccer ball.

And World Cup indifference is as rampant as it’s ever been.

Me and the boys at the bar spent a few minutes trying to figure out why that’s so and what could be done to make soccer more interesting to Americans.

Most of the answers involved adding violence.

“They should be allowed to check,” Bill said. “I’d watch that.”

In fact, he wouldn’t. We have a form of that that’s a niche sport ignored by the sports viewing public.

Another guy said he’d watch more if they’d show a split screen of the riots outside the stadium or the inside brawls between rival nations.

This is a promising idea. Soccer’s hampered by near non-existent scoring. The games would be more interesting if fans of, say, Cameroon, could add points for the national team by beating the crap out of fans from maybe Uruguay.

Soccer viewership suffers from a field that’s too big. The so-called “action” takes place over a prairie-sized field and the cameras need to be so far back it’s like you’re watching a tavern foosball game from the line to get into the men’s room. It’s microscopic.

This could be improved by either shrinking the field or blowing pieces of it to smithereens.

I said the game would be more fun to watch if each team were before the game allowed to plant six or seven land mines where they believe they could cause their opponent the most mayhem.

As the tournament ground on the bloody fields would become progressively more damaged and the games simultaneously more entertaining. The more challenging and apocalyptic the surface, the more interesting the event becomes. It’s that way with professional golf and a typical Sunday drive along Pennsylvania’s highways.

Of course, these ideas will be ridiculed by the purists so I have a goodwill suggestion that will improve American relations around the world.

Instead of fielding our top soccer athletes — men who washed out of football, basketball, baseball, tennis, swimming, fencing and all the other sports young men play in the hopes it’ll get them laid — we should dress our fat cat CEOs who sponsor the team.

This would appeal to their massive egos and the ratings would surge because we’d all tune in to see them get creamed on the pitch or maybe have an entertaining heart attack as time wound down.

And, best of all, they’d be guaranteed to lose and that should be our paramount ambition regarding U.S. soccer.

Think about it. Today, devoted American soccer fans — and that’s about 28 folks — are rejoicing. Why? Because we beat Ghana.

I sense you’re not feeling the same euphoria you felt over the 1980 “Miracle on Ice” takedown over the Evil Empire.

Do you know anything about Ghana?

Me neither so I looked it up. It’s a wonderful little nation. We should ask if it’d like to be America’s little brother — like Canada only littler.

Ghana is the world’s largest producer of cocoa. How delightful. I read that and imagined the leading ethnicity among its 24.2 million people is Oompa Loompa.

It’s considered the 7th best-governed country in all of Africa.

Suck on that, Djbouti!

It’s such a productive and stable democracy we really should consider them next time the neo-cons demand we find another pushover to invade.

And today these humble Ghanas are all devastated, bereft, morose. All because they lost a soccer match neither you or I give a crap about.

Imagine how happy Ghanans would be today if they’d beaten us. They’d be overjoyed. They’d feel immense national pride. The streets would be running with domestic hot chocolate.

Think of the international goodwill we’d score if we let a team like Ghana beat us.

So if America cares at all about soccer, losing should be our goal, our only goal.

And this being soccer, one goal is usually all it takes.

NFL’s a bore: Here are 5 ways to improve it