How I nearly quit after Day 3 of my new job 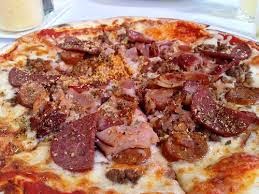 So I’d gone nearly 22 years without a single co-worker. How long did it take for me to get involved in a petty dispute that made me want to quit?

I guess I’m just not cut out to work with my fellow man.

The dispute was over a mistaken pizza topping abbreviation.

That an unwanted vegetable was the root cause of me nearly quitting will probably give you some idea why I never enlisted in the armed forces.

Friday was my third night and all the customers had been friendly and patient and my regard for Dave has only increased as he’s become my boss in addition to my landlord, friend and the man I rely on to provide soothing inebriation. In any capacity, he’s just one of the world’s greatest guys.

And I’m not just saying that just because I’ve slipped right back into my comfortable old habit of brown nosing the guy who signs my checks.

The Pond is famous for its delicious pizza and about half of the bar orders on a busy Friday night involve pizza. This is good for me because I have experience working in pizza joints all through Pittsburgh South Hills so I was confident I could handle those aspects of taking orders.

Here’s what came back for Jeff at the bar about 10 minutes later: A 4-cut with green peppers.

Jeff’s a regular and a good guy. He’s not going to throw a fit over what is a rare mis-order, especially when there’s a new guy who’s responsible.

So I take what to me is a 4-cut G.P. back to the kitchen and explain the error.

Well, it was like I was a transplant surgeon explaining to a father that — whoopsie-daisy! — we mistakenly inserted into your ailing daughter a third kidney where we were supposed to put in that new heart.

The cook was furious.

“The order said ‘pep!’ Why would you write ‘pep’ on an order for a pepperoni pizza?”

As I was unsure whether he was kidding or not and he was holding a long, sharp knife, I explained I wrote “pep” as a handy abbreviation for pepperoni.

I told Dave and he explained that’s the way it’s always been in The Pond, which has been around since 1954.

“It goes back to when you could only get four toppings, pepperoni, mushrooms, green peppers and anchovies. Back then a common pizza order was written EBF, which stood for ‘Everything But Fish,’ which meant hold the anchovy.”

It was an interesting history lesson, but I wondered how today the cooks know to differentiate pepperoni from ham, bacon, sausage and other popular toppings that hail from the meat food group.

I went back into the kitchen about 10-minutes later to retrieve Jeff’s meat pizza and the cook was still seething. He explained it all to me again in the same insulting tone.

I told him, look, I get it. It’ll never happen again. I swear.

And it won’t. It’s now what I call a brain barnacle, something forever adhered to my cranium.

So when he brought it up a full week later that’s when I thought, f-this, I’m quitting.

And 25 years ago I surely would have. I can’t stand being talked to like that. But I realized that would be an immature reaction. The cook’s always been a friend and he’ll be so again when my brief stint as bartender concludes.

Plus I remember reading an old Arab proverb about how it’s a foolish Bedouin who sows discord in the tent where his lamb pilaf is prepared.

So I’m going to propose we have a little powwow about how we react to honest mistakes. I’m going to say we should discuss the need for mutual respect.

And because I still find it irresistible to needle anyone who’s really pissed me off, I’m going to suggest we call it a little pep talk.