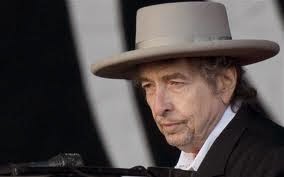 Sometimes it’s a reach for me to illustrate some of my posts with one tidy picture. But I try not to be too obvious. For instance, it would have been a cinch to snag a picture of huge boobs to bestow a picture on this one from 2009. Just a picture of a great big boob. Or a pair. But that would have been too obvious. Or, I guess, two obvious. So I used a picture of Bob Dylan because I mention Bob Dylan and I'm one of those guys who thinks you can never have too much Bob Dylan. I’m re-running this one today because the girl and her $8,000 breasts were in the bar last night. Nothing’s changed.

To me, right there, that’s a hell-worthy sin -- and hell’s going to be mighty crowded if I ever get to decide who belongs there. Cara’s a professional. She’ll get there.

He paid for two big ones and she wound up stuck with three.
Posted by Chris Rodell at 9:49 AM