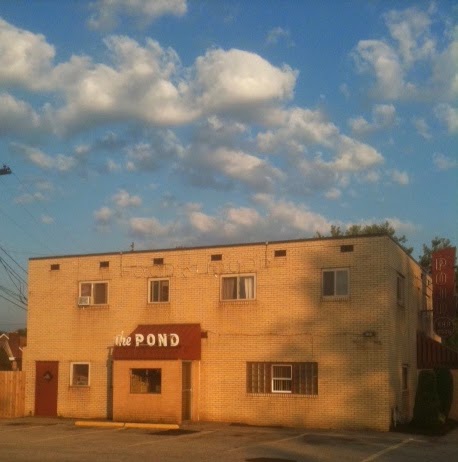 Tending bar tonight for the first time in 29 years has me feeling like a kid on the night before Christmas, only instead of lots and lots of presents I’ll be getting lots and lots of drunken conversation. So much going on today I thought it might be a good day for a round-up so here goes …

• One friend said me tending bar at The Pond tonight (and tomorrow) is the most exciting Latrobe bar news since August ’12 when Cindy up at Sharkey’s got her boob job. I thanked him and said I’ll remember that if Dave ever feels the bar could use another jolt of publicity.

• The night after Dave asked me to help him out, I showed up with our 8 year old for dinner demanding the employee discount, before I’d even poured a single beer. Dave said no. His refusal means my agenda is topped with a new priority goal: Union!

• Many friends have expressed their support for my Pond bartending debut by asking if I’ll give them free drinks. That I’ll not do, but there’s a good chance I’ll probably give them the wrong change.

• I was real tempted this morning to write about my daughter the unicorn hunter. She’s 13 and armed with sharp shears. And by unicorns I’m not talking about the mythical horned horse. Unicorns are what she and I call the stray gray hairs that randomly beanstalk out of my aging skull. Most of my hair is still what I guess you’d call brown. There’s some gray, but my hairs’ oddest feature is at any one time there maybe half a dozen stiff, course gray hairs standing like tiny pole vaults above the field by a good inch or two. It’s like these rogue hairs are striving to turn my head into my late grandfather’s flattop. I don’t mind, but I believe hair should have some uniformity so I ask Josie to scissor the crop, which she does with the kind of relish that makes Edward Scissorhands look lazy. She’s becoming so overly enthusiastic about the duty I fear I might have to start wearing ball caps to places like church.

• A friend of mine just texted and said he planned on showing up tonight and making up crazy drink names just to frustrate me. I told him he was shut off before the bar’s even opened.

• I wonder if I’ll get to throw anybody out for obnoxious behavior. I’d love that. It’s a very God-like feeling. I haven’t seen Dave throw many people out. He usually just dismisses them with a deft putdown that lets them know they aren’t welcome. One of our favorites is the time two younger guys came in and were making a silly juvenile ruckus — lots of loud, silly giggling like the kind you hear at the Chuck E. Cheese. They were aware enough to realize their behavior was out of line and asked Dave if there was somewhere they could sit where they wouldn’t annoy the rest of his customers. Dave said, “Racers.” Racers is the bar that’s about a quarter of a mile away.

• I asked Dave if there’d be any drug testing as part of me working for him. He said no and assured me I could get all the drugs I need from the guys in the kitchen.

• I was sorely tempted to wade into the fascinating Eric Cantor primary loss, but remain reluctant to write about politics because I don’t want to spoil what promises to be a good day defending something I really care less about than the people who’ll feel moved to fury over my gentle jokes. But I hope those who enjoy watching conservative heads explode will join me in starting the rumor that Hillary Clinton is definitely going to run for president and is persuading Michelle Obama to become her running mate.

• Had a successful book presentation to the Greater Pittsburgh Rotary Club at the William Penn Hotel yesterday. Sold a dozen books to 39 attendees. At this point, the sales are secondary to me becoming a more able public speaker — and clearly that’s happening. Yesterday went great and for the second time in four days one of the attendees said I should be a national stand-up comic on a show like “America’s Got Talent.” The compliments catch me completely off guard. I’m very pleased that anyone finds my humor talks that funny, but I have zero interest in trying to succeed in those forums. But I am going to keep it in mind if I ever get ambitious to fail spectacularly in yet another field.

• I’ve been invited to speak to about 250 WVU 4-H students next week. The organizer called and said she wanted to order 250 books at $12 each and wanted to pay me a speaker’s fee. She asked how much I charged. I said something I thought was exorbitant. She said yes. I said, “D’oh!” Either way, it’s still “dough!” I hope. The woman hasn’t called back with the logistics and now I’m again left to wonder if I hallucinated the whole thing.

• I hope I’m not hallucinating Dave’s request to have me help him at the bar tonight. That would be embarrassing.

• There’s a chance tonight could be a perfect storm at The Pond — and when was the last time you heard the term “perfect storm” applied to anything meteorological? But I’ll be amateurishly stumbling around back there behind the bar and tonight may be Teacher Inebriation Night. That’s the night when teachers get together to celebrate another year in the books by getting pie-eyed knowing they have about 84 days to sleep it off. If that happens tonight I probably won’t be fit enough to detail the results until next Tuesday.

• If you’re in town, stop by tonight or tomorrow night -- and be sure to bring a cooler with some sandwiches and cold beers!

I’d much rather see you than serve you.

It’s a bobblehead world
Posted by Chris Rodell at 9:29 AM