Back behind bars: me 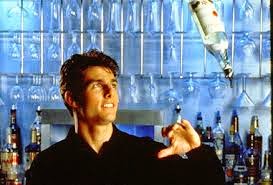 (689 words)
I’ve hinted before at positive developments regarding my prospects. I’ve been offered my first sizable speaking fee and major corporations are considering bringing me in to share my book’s message.

I’ve never felt this encouraged before. Ever. It’s all coming together.

So wouldn’t you know it, just yesterday a buddy offered me a great job right here in Latrobe. Decent pay, easy hours, and a guarantee I’ll be surrounded by smiling faces.

Yes, when it rains, it pours.

Just one problem: Accepting means I’ll have to switch sides. Not political or sexual orientation. It’s bigger than that.

I’ll be going from one side of the bar to the other.

Due to a tumultuous spasm of bar employee turnover, Dave, the owner of The Pond, is down key people in the kitchen and now behind the bar. He called me last night sounding distraught.

Our stalwart friend quit for reasons that are, for now, none of our business.

What he was in effect saying was “Rudolph, with your nose so bright . . .”

And, please, I’m sensitive about my budding gin blossoms so let’s right there end all the bright red nose analogies.

And by “one of the best,” I mean I was never fired for not showing up or being too drunk to tug on a tap.

Me and about a dozen good buddies all worked at what was then the biggest bar in Athens, The Nickelodeon, from 1983-85.

Ah, the ‘80s. MTV ruled pop culture, New Coke was just beginning to tickle our fickle taste buds, E.T. was phoning home via old rotary dial, Live Aid promised to end hunger in Africa and the only cultural figure more imposing than the California Cowboy in the White House was the black man on NBC.

Besides starring on “The A-Team,” Mr. T also played an inspirational role in what I remember as the most monumental night of my bartending career.

One of the biggest sellers at the time was the Long Island Iced Tea. It’s a still-popular drink that includes gin, tequila, light rum, vodka, triple sec, a dash of sour mix, all topped with a little jolt of cola.

Having an entrepreneurial bent, my buddy Jim and I decided we’d give America a heady counter-point to the Long Island Iced Tea.

Like its namesake, it would be big, black and pack a real wallop.

It pains me in hindsight to consider how much good booze we wasted trying to make something even remotely palatable.

The real pity is when we finally found a robust and drinkable mix it was about 1 p.m. and we were too drunk to remember to write down any of the key ingredients. The recipe is today lost to history.

Val’s always wondered why I haven’t sought a job tending bar before. She’d say, “You’re always in there anyway. Might as well get paid instead of just sitting around drinking beer and BSing your life away.”

I tell you, she’s a regular Dr. Phil.

So, of course, I’ll step in and help my friend in his time of need and make sure his thirsty customers don’t go empty.

So there’s a chance I’ll be back where many of my old high school teachers predicted I’d eventually wind up all along: behind bars.

I’ll expect my customers to stay within the bounds of established bar decorum. Any questions about exactly what that means regarding levels of drunkenness and potential for inadvertent nudity, just ask your bartender.

That’ll be me. My rule will be absolute.

When I pour, I reign.

Happy 49th birthday to me!