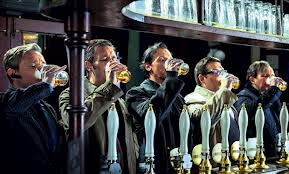 (679 words)
The title credits had not yet concluded when we heard the telltale sound that alerted us we were sharing the theater with people who had no respect for the rules.

The nerve. Someone had smuggled beers into the matinee viewing of “The World’s End,” the new Simon Pegg, Nick Frost flick about a group of middle-aged buddies who try and recreate an epic pub crawl through the old home town.

Of course, I was outraged.

Not at the beer drinkers seated behind us, certainly.

I was mad at Val.

“How come you forgot to bring beer?”

“How come you forgot to tell me?”

That neither of us thought to sneak hootch into the matinee showing of a movie starring some of our favorite elements was proof we’d been too long off our game.

We were seeing the movie the second day after school had resumed.

I imagine I’m like most parents in that I feel the same sort of jubilation on the very first day of school that kids feel on the very last. And once again I’m amazed by the fact that the people we love the very most can sometimes make us the most happy by just leaving us the hell alone.

“The World’s End” is by the same geniuses who made two of our all-time favorite movies, “Shawn of the Dead” (2004), and “Hot Fuzz,” (2007).” I guess they’re too popular to be deemed cult favorites, but those of us who share an appreciation for them feel cultish about our devotions.

And everyone will love “The World’s End” because it mingles drunken revelry with a sci-fi twist involving killer robots taking over this charming English hamlet.

So as the mates get progressively more and more drunk, the world-saving stakes keep getting raised. The juxtaposition becomes hilarious.

At this point reputable film critics would include the uppercase words: SPOILER ALERT!

There is no chance of this happening here -- and not just because I’ve never been described as reputable.

About three quarters of the way through the movie -- poof! -- the power went out. A huge storm was raging outside.

I’ve been rained out at baseball games, but this was the first time it ever happened inside a movie theater.

They gave us credits to see the movie again, which means I’m now in a bit of a fix.

See, the Pegg character is this lovable bloke who never really grew up, doesn’t have a job, and loves nothing more than getting all gooned up with his mates at the local pub.

So I detect autobiographical elements in the story and I feel I need to see how it ends for reasons of self-interest.

Like if he acts heroically, I’ll feel justified in how I’ve spent my life and will just press on until I sense people are beginning to behave robotically.

Or maybe that’s not a good idea. Take a look around you. You’d swear 70 percent of the population are already robots. But there could be grave consequences if we start smashing heads without first seeing some internal wiring.

I love having a chance to see a good movie again, this time for free and with, of course, a tailgate cooler of lager cunningly disguised as a portable dialysis machine.

But my darling wife is like one of Pegg’s old mates, all of whom expressed varying degrees of reluctance to bridge the binge. She has responsibilities. She has a job. She has children to take care of.

She’s looking at the calendar and thinking we can’t get to the movie again for about two weeks.

I don’t think I can wait that long.

I’ve already heard from buddies who are furious I didn’t see the flick with them.

What am I going to do?

But I guarantee you this much: whatever I do will involve drinking beer and other benign human behaviors that’ll ensure no one will ever mistake me for no stinkin’ robot.

Email ThisBlogThis!Share to TwitterShare to FacebookShare to Pinterest
Labels: " Simon Pegg is the best, movie spoilers, See "The World's End, sneaking beer into movies, The Pond in Latrobe