Golf's most amazing Tiger-free story: what are the odds? 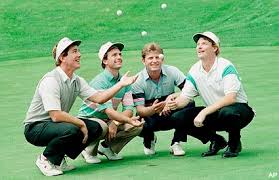 (639 words)
Today will be a good day for math nerds to tune into the coverage of the PGA Championship. You might get to enjoy a discussion of how many zeros are in the preposterous number quadrillion.

Quadrillion is one thousand times one million. The number is familiar to only the most mathematically fluent.

So how come I know so much about it?

It played a key role in a 2003 story I did for “USA Today Weekend,” back when that was a big deal -- and I mean “big deal” both in terms of prestige and the fact that back then it was still a regular-sized publication and not the cocktail-napkin sized wisp production costs have forced it to become.

I don’t talk about it much -- why the hell would I? -- but I am the world’s leading expert on golf holes-in-one, so hailed by no less than “The New York Times” in August 2009 and cemented in 2012 in the bestselling golf book, “On Par: The Everyday Golfer’s Survival Guide.”

The fact that “The Times” author and the “On Par” are the one in the same Bill Pennington does nothing in my mind to diminish the honor. The friendly gentleman interviewed me about aces for a story he was doing about the phenomenon and used much of the material for his fine book.

My favorite part of his essential golf book is that he mentions me three times and Arnold Palmer just twice.

See, I in 2003 became the author of “Hole in One! The Complete Book of Fact, Legend and Lore on Golf’s Luckiest Shot.”

But I thought there was something better for me out there than just chasing birdies.

And here I am today, toiling near daily for free on a blog whose very title hints at impoverished professional opportunities.

Oh, well. I may not have much in the way of income and job security, but I still have a closet full of snazzy free golf shirts.

But I thought a book on the most amazing shot in sports would be fun and lucrative.

I was half right. It was a lot of fun.

Money-wise it was a bit of a loser. I made more writing articles as the expert on the shot than the book did on its own.

The best was the full-page “USA Today Weekend” gave me when I told them I had an ace story involving incredibly long odds.

The book’s timing was perfect because, like today, the PGA Championship was being hosted that summer at Oak Hill C.C, site in 1989 of one of the most amazing two hours in golf history

You need to first understand how rare and remarkable any ace is: Experts say the odds of an amateur getting an ace are 12,600-to-1.

For perspective, I’ve played a lot of golf for 40 years and have never had an ace. Never even witnessed one.

The odds? A Harvard mathematician pegged them 1.89 quadrillion to 1.

Here’s the part with which many of those familiar with the story are unaware.

A fifth golfer, Hubert Green, came within inches of acing during the same miraculous span.
Imagine the odds.

We live in a world of wonders.

I’d think about approaching them to sponsor this post but something tells me the odds are against it.

Email ThisBlogThis!Share to TwitterShare to FacebookShare to Pinterest
Labels: best book on aces, Bill Pennington, golf on aces, how much is a quadrillion, most amazing golf story, PGA four aces at Oak Hill